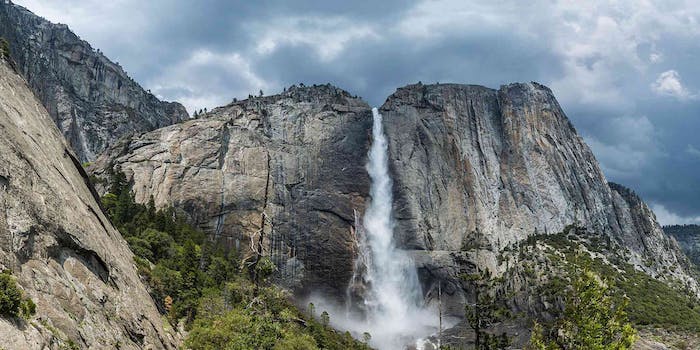 Ah, the great outdoors. The feel of walking barefoot through a field of soft, waving grass on a warm summer morning. The satisfying exhilaration of jumping into an icy lake after a long afternoon hike through the mountains. The soothing whir of a drone overhead taking pictures as you set up your campfire.

Alas, that idyllic picture of wilderness adventure is no longer. On Friday, the National Park Service (NPS) announced in a press release that it was officially banning ‟the launching, landing of, operating of unmanned aircraft on [national park] land and waters.”

“We embrace many activities in national parks because they enhance visitor experiences with the iconic natural, historic and cultural landscapes in our care,” the National Park Service’s Jonathan B. Jarvis said in a statement. “However, we have serious concerns about the negative impact that flying unmanned aircraft is having in parks, so we are prohibiting their use until we can determine the most appropriate policy that will protect park resources and provide all visitors with a rich experience.”

The NPS cited a number of incidents in recent months when drones have been reported in national parks from Mount Rushmore to Mount Zion. In one case at the Grand Canyon, a drone was seen loudly buzzing over the heads of park visitors before crashing into the canyon.

NPS spokesperson Jeffrey Olson told the Wall Street Journal that flouting the drone ban could net someone up to a $5,00 fine and six months in jail.

Some parks, like Yosemite, have already instituted their own drone bans. This announcement simply extends those prohibitions across all of the park system’s 59 locations.

The Federal Aviation Administration (FAA) has prohibited the use of drones since 2007, although use by hobbyists is permitted as long as they comply with a number of best practices, which include staying within 400 feet of the ground, only operating within line of site of the on-the-ground pilot, and avoiding flying near airports.

The FAA has been working on a long-delayed permanent set of drone regulations for the better part of a decade. The agency has said it expects to have a draft set of rules governing smaller drones before the end of this year.

Much like the FAA, the NPS is only curtailing drone use temporarily while it comes up with a comprehensive set of regulations. According to a Park Service press release, ‟that process can take considerable time,” so it might be best to leave your drone at home for the foreseeable future.

If you’re curious what the world will be missing while America’s national parks remain drone-free zones, check out these videos of drone flight over swathes of the country’s federally managed wilderness: