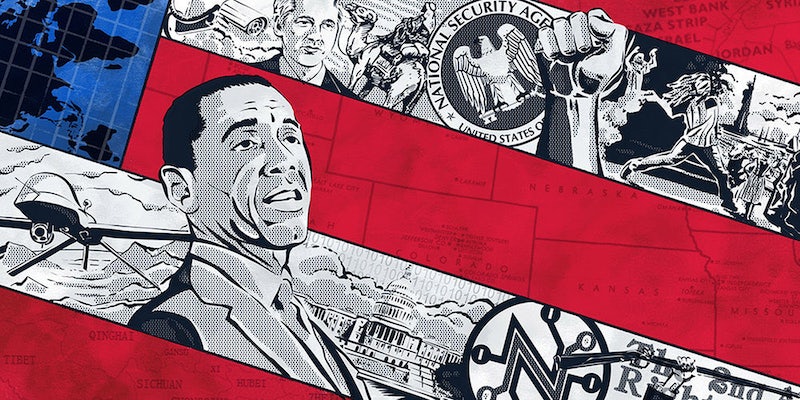 Metaphors, zombie CISPA, and the dumbest thing you've ever seen on QVC.

What’s it like to be president of the United States? It’s a strange question to ask because the answer is simultaneously obvious and completely unknowable. Nearly everyone in the world can conceptualize, at least at an extremely basic level, what the leader of the free world does, but actually living it is so confounding unique that true knowledge of the experience can only be shared by the small handful of people who have themselves held the gig.

Past presidents have been so profoundly affected by their stints in the Oval Office that they do things like retire to build houses for poor people, amass a collection of novelty socks, take up amusingly childish painting, and even go back to first principles to remind themselves why they got into politics in the first place.

Nevertheless, from the outside, piercing the shell of the day-to-day pressures shaping the job of most powerful person in the free world is tricky, which is why we have to rely on metaphor.

The brilliant Seattle dog that loves public transportation is basically the president of the United States. Eclipse is a 2-year-old black Lab-bullmastiff mix who has learned how to get on the bus at the stop near her house, ride it to a nearby dog park, and then get off all by herself. Sure, there’s no way Eclipse earns enough money to pay the federal income taxes that often support public infrastructure and transportation projects, making her a lazy, entitled member of the “moocher class.” But show us a human 2-year-old who rides the bus alone, and we’ll show you the phone number for Child Protective Services.

Anyway, that dog navigating the bus system is a lot like the president of the United States navigating the most difficult job on the planet. See, as president, you’re on giant, complicated system that’s not really designed to be easy for you to use. There are a seemingly infinite number of rules, some of which your special status allows you to break with impunity, while others are truly immutable. You can bark loudly to get your way—sometimes it works, other times it doesn’t—but it always usually makes the bus-riders who don’t like dogs mad. But they’re going to be mad no matter what you do because they proclaim how much they hate dogs to everyone they know all the time. Eventually, you figure out how the system works to ride the bus effectively; by that time, the novelty of a dog riding the bus has worn off, everyone’s just kind of grumpy at you and hopes you leave without causing any trouble, like pooping on the floor or biting a small child.

Obama revealed a new cybersecurity plan. Since it seems like the U.S. can barely go a few days without a high-profile cyberattack, it makes sense that President Obama would push for a revamp of the country’s cybersecurity laws. North Korean hackers have already put at risk America’s greatest natural resource: stoner comedies made by Canadians and released by Japanese multinational media conglomerates. As Americans, we’re not about to let that happen a second time, even if Seth Rogen’s next move is called Sausage Party and follows the adventures of a foul-mouthed talking hotdog. That’s how much the Obama administration cares about free speech.

Obama’s new proposal contains two major parts: a revamp of the Computer Fraud and Abuse Act to increase penalties for hacking, as well a new provisions that would make it easier for different government agencies to share information with each other. As if to put a punctuation mark on the dire need for reform, while the President was giving a speech about about his proposal, CENTCOM’s Twitter and YouTube accounts were hacked by a pro-ISIS group calling itself the CyberCaliphate.

The timing of the hack would make it seem like the reforms Obama called for are too urgent to ignore, except there doesn’t appear to be anything in the bill that would have stopped either the Sony hack or the CENTCOM hack. As The Electronic Frontier Foundation’s Deputy General Counsel Kurt Opsahl put it in regard to the Sony hack, “To be fair, it’s hard to legislate ‘don’t store your passwords in unencrypted files in a folder called passwords.’”

Whatever your views, feel good that "The Newsroom" won't have a chance to oversimplify the Charlie Hebdo story. We can all share that.

President Obama wants you to have better broadband access. In America, we have a federal system where each state has their own government that gets to pass its own laws for what is and isn’t legal for citizens and governmental entities to do there. But sometimes those laws are dumb and were put in place by powerful corporate interests who are happy giving millions of American slow Internet service in exchange for large amounts of money. The broadband Internet market provides the cheapest, fastest, most reliable when consumers can pick from a variety of options. For a variety of reasons, the American cable market isn’t very competative. One solution is for local governments to build their own public Internet providers, but cable companies don’t like this idea very much, so they’ve convinced nearly half of state legislatures to impose some kind of laws limiting this type of public, municipal Internet.

Obama, who doesn’t have to worry about any more elections and seem to kind of just be doing whatever he wants, has ordered the FCC to find ways to get around all these laws, probably by the regulatory equivalent of ¯_(ツ)_/¯.

Free speech in France is more complicated than you think. In the wake of the Charlie Hebdo attack, what does “free speech” mean? Does it mean:

Answer: all of the above.

The marketing trolls behind the ‘OpCharlieHebdo’ website. True to form, online hacktavists Anonymous created something called #OpCharlieHebdo as a way to disrupt the online communications of terrorists. When all you have is a hammer, every problem looks like a nail; when you spend all your time sitting behind a computer in your mom’s basement, every problem start to looks like one that can be solved from using the computer in your mom’s basement. A few hours after the hashtag popped up on Twitter, a website appeared with an ominous clock presumably counting down to a major online attack against the forces of terror.

Protip: If you see a new website of uncertain origin with a giant clock counting down to something extremely topical, it’s probably a scam by marketing trolls Rantic, who are hoping to get clicks from credulous suckers. They did when Family Guy killed off Brian; they did it when the 2013 government shutdown made it seem like temporarily out of work NASA engineers were about to unveil a major discovery. They did it with #OpCharleHebdo and they’ll do it again and again and again. They do it because it works. They do it because they are the worst. Let’s all try really hard to stop falling for it. Deal?

The circulation of this information is dangerous because, if the location of literally every single goat in the United States were to fall into the hands of America’s enemies, our country’s strategic national chèvre reserve could be at risk. This data need to be protected as part of Obama’s cybersecurity initiative to avoid it from falling into the hands of the baaaaaaaaaaaad guys.

Bitcoin price plummets to 2-year low. Remember early last year when your annoying friend wouldn’t shut up about investing in Bitcoin? Remember how you thought it was a dumb idea and you didn’t do it? Excellent work.

Mike Huckabee’s courting of the anti-Beyoncé vote is political suicide. Show us a man who says bad things about Beyoncé, and we’ll show you a man who fundamentally does not understand the American people.

What is CISPA? It’s back. It still sucks. The Internet still hates it. Call your elected representatives.

In a few years, Clint Eastwood will make a movie glorifying someone who bragged about going up onto a nearby water tower and shooting as many of the college football looters as possible. Just kidding—go Buckeyes!

U.S. Senate to vote on whether climate change is real. “On this issue, the scientists have been virtually unanimous in saying that climate change is real, it is caused by human action, it is already causing devastating problems which will only get worse in the future and that we need to transform our energy system away from fossil fuel,” Sen. Bernie Sanders said in a statement. “Do members of Congress believe the scientists or not?”

On a related note…

QVC hosts seriously don’t know what the moon is. This is not a joke. World famous fashion designed Isaac Mizrahi spent a few minutes on national television debating with a QVC host over whether the moon was a planet or a star. Again: This is not a joke. [Cries into hands.]

A you an unusually clever dog interested in getting weekly updates about humans who are significantly dumber than you? Subscribe to the weekly @DotPolitics newsletter by clicking here.