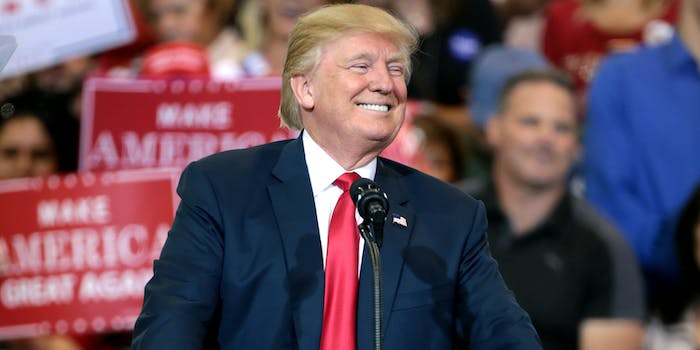 He seems upset about something.

Donald Trump has plenty of thoughts on his mind. And as is his weekend custom, he spilled the contents of his brain onto Twitter in a long rant that touched on everything that seems to be bothering him—including former FBI Director James Comey, the Syria bombing and why people are making fun of his “Mission Accomplished” boast, and the raid on the office of his attorney Michael Cohen.

His Twitter rant, as per usual, went from topic to topic haphazardly and didn’t seem to be in any kind of order. But here it is in its entirety, thus far.

Unbelievably, James Comey states that Polls, where Crooked Hillary was leading, were a factor in the handling (stupidly) of the Clinton Email probe. In other words, he was making decisions based on the fact that he thought she was going to win, and he wanted a job. Slimeball!

The big questions in Comey’s badly reviewed book aren’t answered like, how come he gave up Classified Information (jail), why did he lie to Congress (jail), why did the DNC refuse to give Server to the FBI (why didn’t they TAKE it), why the phony memos, McCabe’s $700,000 & more?

Comey throws AG Lynch “under the bus!” Why can’t we all find out what happened on the tarmac in the back of the plane with Wild Bill and Lynch? Was she promised a Supreme Court seat, or AG, in order to lay off Hillary. No golf and grandkids talk (give us all a break)!

The Syrian raid was so perfectly carried out, with such precision, that the only way the Fake News Media could demean was by my use of the term “Mission Accomplished.” I knew they would seize on this but felt it is such a great Military term, it should be brought back. Use often!

I never asked Comey for Personal Loyalty. I hardly even knew this guy. Just another of his many lies. His “memos” are self serving and FAKE!

Attorney Client privilege is now a thing of the past. I have many (too many!) lawyers and they are probably wondering when their offices, and even homes, are going to be raided with everything, including their phones and computers, taken. All lawyers are deflated and concerned!

Slippery James Comey, a man who always ends up badly and out of whack (he is not smart!), will go down as the WORST FBI Director in history, by far!

This of course has it backwards. Comey was confident Hillary would win and didn't want it to look as if she'd been helped by the administration; so he went public (foolishly and misleadingly) with "news" damaging to her ten days out.
Comey didn't help Hillary; he hurt her. https://t.co/zjQOOWvwkD

It’s worth noting that Comey’s interview with ABC News will air Sunday night, and Republicans have already launched their offensive against the man Trump fired. Don’t be surprised to see more Trump tweets after that interview is shown.