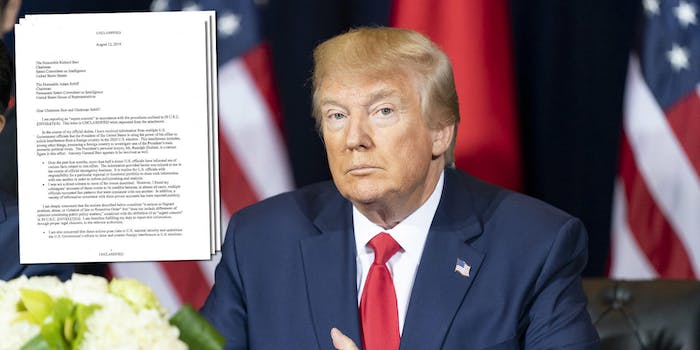 The complaint was released the day after the White House released a memorandum of the call.

A whistleblower complaint about President Donald Trump alleging he used “the power of his office to solicit interference from a foreign country in the 2020 U.S. election” was made public on Thursday.

The nine-page complaint, which was lightly redacted, is at the center of the push among House Democrats to impeach the president.

Its release—which details a conversation between Trump and Ukrainian President Volodymyr Zelensky where he tries to push for the foreign leader to work with U.S. officials to investigate former Vice President Joe Biden and his son—comes as Acting Director of National Intelligence Joseph Maguire is testifying before the House on Thursday, where the complaint will come up.

On Wednesday, the White House released a memorandum of Trump and Zelensky’s conversation outlining what they discussed. In it, Trump pushes for Zelensky to work with Attorney General William Barr and Rudy Giuliani for a Biden investigation.

The complaint mostly confirms much of what has come out in recent weeks. It does however, allege that the White House went to greater-than-normal lengths to “lock down” records of Trump’s call with Zelensky.

The whistleblower said White House officials were “directed” to remove the electronic transcript of the call from a typical computer system used to store such things and moved into a different system that is used to handle “classified information of an especially sensitive nature,” the complaint says.