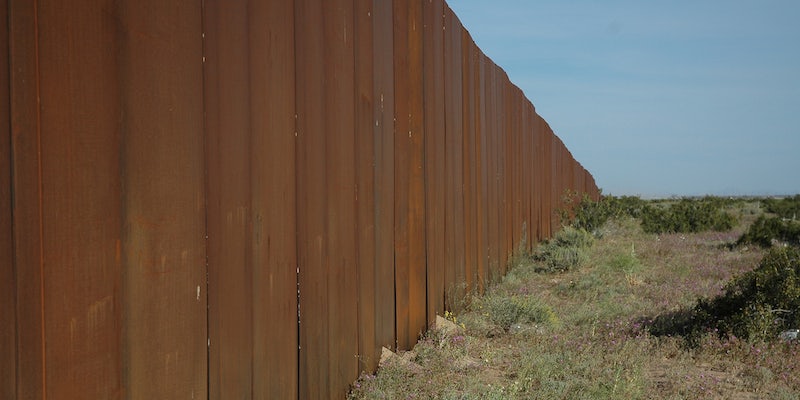 Can Donald Trump really build a border wall to Mexico?

Trump's wall faces a slew of hurdles before it can become a reality.

President-elect Donald Trump has a big league agenda for his first 100 days in office, including one of his most concrete—and controversial—plans: to build a wall between the U.S.–Mexico border with full reimbursement from Mexico.

The construction of a wall was one of his earliest promises to the American people. At Trump rallies, supporters chanted “build the wall, build the wall,” as Trump backed his proposal with a promise. When announcing his run for president, Trump assured his supporters that he will “build a great wall, and nobody builds walls better” than him. He added that he will “build them very inexpensively.”

Of course, campaign trails are for boasting, and the promise of the wall may be too bold given the challenges Trump will face—including those from Mexican President Enrique Peña Nieto.

After his presidential win, Trump still stands firmly with his decision to build the wall. Below is the outline for Trump’s plans for immigration from his first 100 days outline, which includes the construction of Trump’s wall:

7. End Illegal Immigration Act Fully-funds the construction of a wall on our southern border with the full understanding that the country Mexico will be reimbursing the United States for the full cost of such wall; establishes a 2-year mandatory minimum federal prison sentence for illegally re-entering the U.S. after a previous deportation, and a 5-year mandatory minimum for illegally re-entering for those with felony convictions, multiple misdemeanor convictions or two or more prior deportations; also reforms visa rules to enhance penalties for overstaying and to ensure open jobs are offered to American workers first.

With few details on how this agenda will actually be accomplished, the assumption that Trump will actually be able to keep his promise to build the wall between the U.S. and Mexico border remains debatable. Here’s what you need to know.

What will Trump build?

Trump’s proposed wall would stretch along the nearly 2,000 mile-long U.S.–Mexico border to prevent immigrants from crossing over into the country.

“On day one, we will begin working on an impenetrable, physical, tall, powerful, beautiful, southern border wall,” Trump said during his campaign. “We will use the best technology, including above and below ground sensors … towers, aerial surveillance, and manpower to supplement the wall.”

During an episode of NPR’s Planet Money, Tod Sternfeld of Texas-based Superior Concrete Products estimated that the construction process will take some 250,000 truckloads of concrete just to make the wall. That’s three times the amount of concrete used in the Hoover Dam, plus even more steel reinforcement.

What is the wall’s purpose?

Not every part of Trump’s wall will look like what you’re imagining.

Along the U.S. and Mexico border, there are already sections blocked with walls and fencing, giving Trump an existing foundation to build upon.

I like Mexico and love the spirit of Mexican people, but we must protect our borders from people, from all over, pouring into the U.S.

According to Christiana Coleman, a public affairs specialists with the U.S. Customs and Border Protection, there are currently 702 miles of fencing along the border, with mostly chain-link steel barriers. The current structure is single paneled, but some spots along the border fencing are doubled, even tripled for a few miles.

“As far as the fence construction, the first recorded fence installation was in the 1960s, approximately 0.1 miles of fence in San Diego,” Coleman said. “In 2006, the Secure Fence Act was passed in October. At that point, three programs to construction fence were developed including Vehicle Fence, Pedestrian Fence, and Pedestrian Fence.” 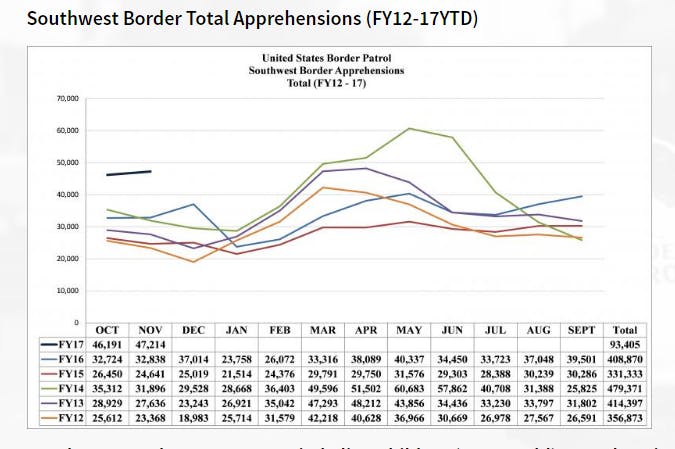 Above is a graph showing the total apprehensions along the U.S. and Mexico border.

Trump calls the current state of the Southern border security “a joke,” but the structure that is already in place may serve as a starting point for his wall. With the 700 miles of existing wall structure, it seems unlikely that Trump would start from scratch but instead add to the walls with up-to-date technology, structure, and more guards.

How much will the wall cost and who will pay for it?

Those are the million—or rather, billion—dollar questions.

Despite what Trump has claimed, former Mexico President Felipe Calderón said that his country will not “pay any single cent for such a stupid wall,” and President Enrique Peña Nieto politely agrees, too. If Trump wants to build his wall along the U.S. and Mexico border, he will almost certainly have to turn to the U.S. Congress and ask for billions of dollars.

On Jan. 5, Trump’s transition team reportedly told members of Congress that they prefer to fund the wall through the appropriations process rather than fighting to pass a standalone bill. The move would cost taxpayers billions of dollars, but Trump believes that Mexico will find it in “their best interest” to reimburse America.

Trump claims the total cost will be between $8 to $12 billion, but engineers and professionals in the industry estimate the total to be a lot higher. According to Sternfeld, the amount of money to construct the wall would be astronomical, and a study by research firm AllianceBernstein estimates it will likely cost $15 billion to $25 billion.

In 2009, the Government Accountability Office said the cost to construct a mile of fencing averages between $2.8 million and $3.9 million on flat land, while other areas with desert or mountain terrain could cost nearly $16 million per mile. The existing miles of fencing cost the government more than $7 billion.

What are the conflicts?

Besides the major conflict of how Trump plans to pay for the wall, land and safety are just a few of the many hurdles Trump faces.

The issue of land will prove to be a struggle for the government, as Native American tribes probably won’t be lenient with the construction of a wall through their sovereign land—especially considering the Dakota Access Pipeline protests. Trump’s wall will also likely require eminent domain seizures of private property, where the government essentially forces people to sell their land for the development.

Border security will increase at the wall and in its surrounding areas, for better or worse. Trump talks about deporting the estimated 11 million undocumented people living in the U.S. in a humane fashion, but he has also expressed a liking to the way Dwight Eisenhower loaded undocumented people in trucks for a grueling trip back to Mexico.

Many undocumented immigrants have families in America, where their children were born into citizenship. The fear of deportation and a grand wall placed between them is a cry that was continuously heard throughout the opposition toward Trump’s America.

If you’re doubting that he has it in him, there is a minor example setting precedent: Trump has already built a 15-foot barrier along the Trump Organization golf course in Scotland, blocking the rural homes that refused to give up their land for his leisure game. However, with the country $20 trillion in debt and increasing,  the construction of the president-elect’s second wall might not be as grand.

The Daily Dot reached out to the President-elect Donald Trump’s transition team for comment.