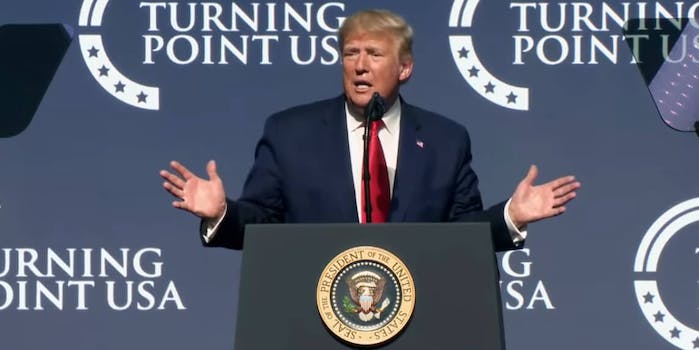 Trump, for some reason, talks about the size of the universe while bashing windmills

President Donald Trump has made it abundantly clear he does not like windmills. And over the weekend, he bizarrely brought up the size of the universe as he (once again) bashed the renewable energy.

The president made the odd connection during a speech he gave to Turning Point USA.

“I never understood wind. I know windmills very much, I have studied it better than anybody,” the president said during his speech. “I know it is very expensive. They are made in China and Germany mostly, very few made here—almost none—but they are manufactured, tremendous, if you are into this, tremendous fumes and gases are spewing into the atmosphere. You know we have a world, right?”

Trump continued, this time out-of-nowhere connecting the size of the universe to windmills.

“So the world is tiny compared to the universe. So tremendous, tremendous amount of fumes and everything. You talk about the carbon footprint, fumes are spewing into the air, right? Spewing.”

It isn’t clear what Trump meant when linking the size of the universe to windmills.

President Trump: "I never understood wind, you know I know windmills very much. I've studied it better than anybody." pic.twitter.com/0U432SgNA2

Trump has a history of bashing windmills, including (incorrectly) implying that they cause cancer.

During a speech before the National Republican Congressional Committee in April, Trump implied that the noise caused by windmills caused cancer—a notion that has no evidence to support it.

Earlier this year the president also said he wouldn’t “lose that wealth” in the United States “on dreams, on windmills.”