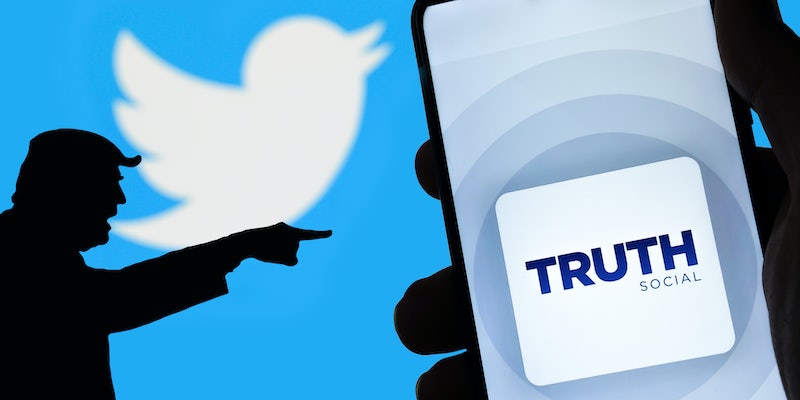 In the wake of Musk’s $44 billion purchase, Trump claimed in a statement on Friday morning that Truth Social had recently outperformed every other social media platform.

“TRUTH SOCIAL has become somewhat of a phenomena,” Trump said. “Last week it had bigger numbers than all other platforms, including TikTok, Twitter, Facebook and the rest.”

While it remains unclear what exactly Trump means by “bigger numbers,” analysis of active user statistics indicates that Truth Social is nowhere near the top.

Global social media statistics gathered by the data firm DataReportal show that Truth Social was not present on a list of the 17 most trafficked services. As of this month, Facebook remains the most visited platform with 2.9 billion monthly active users. TikTok came in 6th place with 1 billion active monthly users, while Twitter garnered the 14th spot with a potential advertising reach of 544 million.

Truth Social, according to data from Forbes, has a mere 2 million active monthly users in comparison.

In his statement on Truth Social, Trump went on to congratulate Musk on his purchase of Twitter while asserting that the platform would become “much smaller.”

“I am very happy that Twitter is now in sane hands, and will no longer be run by Radical Left Lunatics and Maniacs that truly hate our country,” Trump said. “Twitter must now work hard to rid itself of all the bots and fake accounts that have hurt it so badly. It will be much smaller, but better. I LOVE TRUTH!”

Even with Trump’s apparent attempts to hype up his own platform, Truth Social has struggled from the very beginning.

Just hours after Trump announced plans to create his own social media platform back in October of last year, a hacker who spoke exclusively with the Daily Dot was able to locate a web domain running the mobile beta for Truth Social. This allowed numerous journalists, including those from the Daily Dot, to register accounts in the names of Trump himself and ex-Vice President Mike Pence.

The Daily Dot was also able to gain access to an internal beta version of Truth Social used by developers in February and secure the handle @realDonaldTrump.

While it remains unclear what actions Musk will take with Twitter, a source speaking with Bloomberg has said that the new owner plans to reverse lifetime bans. The move, if carried out, could see many of the right-wing users who left for Truth Social after being permanently banned from Twitter return.