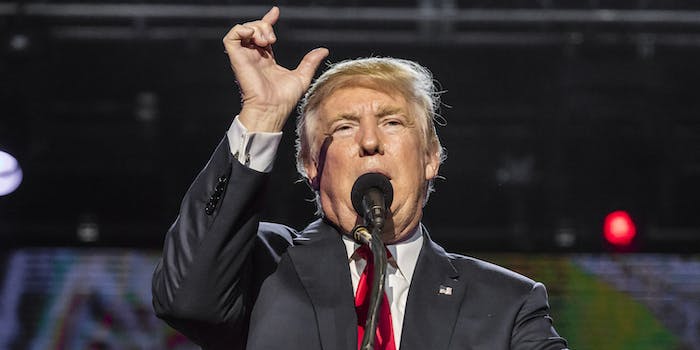 Here's how Trump could still send the insurance markets into chaos.

After a devastating defeat on the Senate bill to repeal Obamacare early Friday morning, President Donald Trump took to Twitter on Saturday afternoon to send a threatening message to lawmakers and insurance companies.

Early Saturday morning, Trump demanded the Senate kill off the filibuster rule (even though the healthcare bill only needed a simple majority) and said the GOP senators “looked like fools.” Trump’s anger apparently continued on later in the day.

After seven years of "talking" Repeal & Replace, the people of our great country are still being forced to live with imploding ObamaCare!

If a new HealthCare Bill is not approved quickly, BAILOUTS for Insurance Companies and BAILOUTS for Members of Congress will end very soon!

Though it seems unlikely at this point that Senate Majority Leader Mitch McConnell could get an Obamacare repeal passed at this point—he tried three times last week and failed each time—the Trump administration still could hurt Obamacare.

As the Los Angeles Times explained:

Officials could stop marketing and outreach efforts that encourage people to sign up during open enrollment periods. They could refuse to enforce the requirement that people buy insurance or pay a tax — a step that officials already have said they will take. And they could stop trying to keep insurance companies in the markets.

None of those actions would cause the markets to collapse overnight, but they would destabilize them over time by driving out healthy people, which causes costs to rise, which in turn drives out more healthy people. That’s what’s known as a death spiral, and it could happen at least in some parts of the country eventually. …

The biggest issue involves money that has the bureaucratic-sounding name of cost-sharing reductions. Basically, the government tells insurers that they need to hold down the insurance deductibles and co-payments that they charge low-income people. That costs the insurers money. To make the insurers whole, the government is supposed to reimburse them.

Trump has threatened to stop those payments, which costs about $600 million per month. If he cuts off those reimbursements, insurance companies likely would raise premiums and/or pull out of the individual market. That, observers fear, would send the insurance market into pure chaos.

Trump already has taken to threatening members of his own party. He jokingly wondered if Nevada Sen. Dean Heller wanted to be reelected in 2018, and Heller, who originally showed misgivings about the healthcare bill, eventually voted with the GOP. He also tweeted out a threat to Alaska’s Lisa Murkowski, but she still voted to kill the bill.

Whether the Republicans are scared of Trump’s threats or whether they’re scared he might decimate the insurance markets, their response to his latest threats remains to be seen. But a number of key Republicans in Congress have already said the reimbursements need to continue as normal.

“I think they’re going to have to be paid,” Sen. Orrin Hatch (R-Utah) told Politico earlier this month. “You can’t let people be without basic health care.”