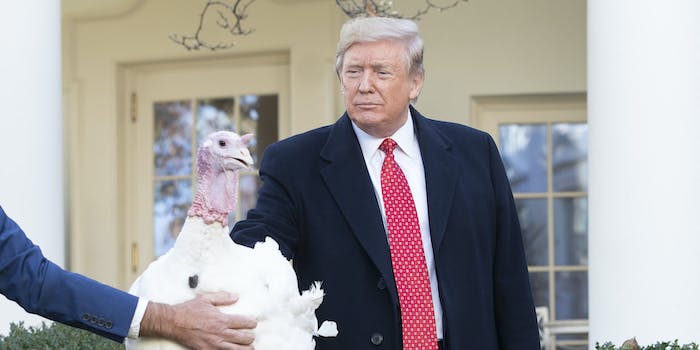 President Donald Trump on Tuesday said that “some people” wanted to change the name of Thanksgiving, telling a crowd of supporters that he wasn’t going to let that happen.

However, as many people quickly pointed out online, there doesn’t seem to be a large groundswell of support to do so.

Trump made his remarks during a rally in Florida.

He continued, bringing up the so-called “War on Christmas.”

“That was true also with Christmas, but now everybody is using Christmas again. Remember I said that? But now we’re going to have to do a little work on Thanksgiving. People have different ideas why it shouldn’t be called Thanksgiving. But everybody in this room, I know, loves the name Thanksgiving and we’re not changing it.”

While Trump only said “some people,” many people assumed he meant liberals, leading to people cracking jokes while using the hashtag #WhatLiberalsCallThanksgiving.

I must’ve missed the part where we called Thanksgiving something else. I hope trump enlightens us soon on what us liberals call it now so I can be sure to say the right thing on Thursday. #WhatLiberalsCallThanksgiving

The day we start the war on Christmas #WhatLiberalsCallThanksgiving

For those of us who have to work, we call it Thursday. #WhatLiberalsCallThanksgiving

When you see there’s people who think there’s a #WarOnThanksgiving pic.twitter.com/Yx6JH9a136

I miss just one of our secret ultra-lib planning sessions and I'm out on this #waronthanksgiving we're supposed to be waging. Anyone got the deets?

While not clear where Trump got his information from, Fox News did run a bit the day before on how liberals want a more “PC” Thanksgiving. So probably from there.