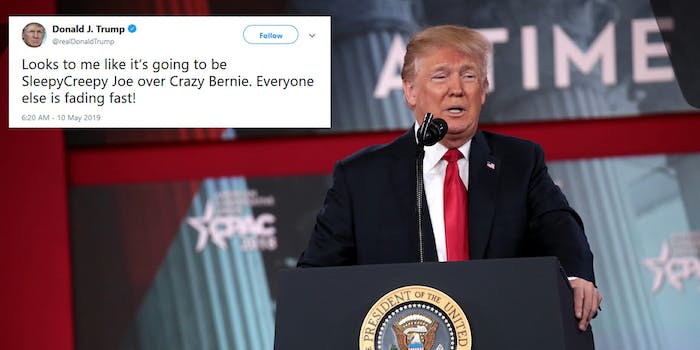 Trump breaks promise not to rhyme with new nickname for Biden

Expect more of this as the 2020 election draws closer.

President Donald Trump weighed in on the early stages of the 2020 Democratic primary on Friday morning, predicting that the wide field of candidates would come down to former Vice President Joe Biden and Sen. Bernie Sanders (I-Vt.).

He also updated his nickname for Biden, calling him “SleepyCreepy Joe,” instead of “Sleepy Joe” as he’s done in the past, presumably referencing a number of women who came forward and said he inappropriately touched them.

Last month, Trump reportedly thought “something else that rhymes” with sleepy to be “too nasty,” according to the Washington Examiner. It appears he’s gotten over that.

“Looks to me like it’s going to be SleepyCreepy Joe over Crazy Bernie. Everyone else is fading fast!” the president wrote on Twitter.

Looks to me like it’s going to be SleepyCreepy Joe over Crazy Bernie. Everyone else is fading fast!

Since Biden entered the race, most polls have shown that he is in the lead for support among Democratic primary voters, with Sanders coming in second.

It is still early in the primary process, with the first debates scheduled to take place late next month.

The president’s tweet caught the eye of many people online, who again noted that Trump has his own history of sexual misconduct allegations.

Hello @FLOTUS, it appears your anti-cyberbullying campaign still has some work to do. https://t.co/0WhUnsaRdt

You ever sort of stop and look at one of these tweets and just think about how weird every fucking moment has become? https://t.co/tpb5YWleVY

“SleepyCreepy” — reminder that as with Blumenthal + Vietnam, Trump will take his own shortcomings (in this case, years of accusations of sexual misconduct) and project them onto others without a hint of irony https://t.co/8cMYypIT6h

Expect more of this as the 2020 election draws closer.