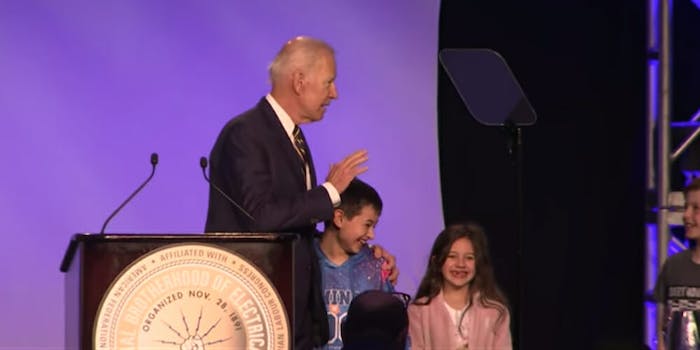 'I just want you to know I had permission to hug Lonnie.'

The same week that several women accused him of inappropriate behavior and unwanted touching, former Vice President Joe Biden tried to make light of the situation by joking about consent, according to BuzzFeed News. It only seemed to make matters worse.

“I just want you to know I had permission to hug Lonnie,” Biden said after hugging Lonnie Stephenson, the International Brotherhood of Electrical Workers’ president, during a speech in Washington, D.C., on Friday.

It’s clear @JoeBiden hasn’t reflected at all on how his inappropriate and unsolicited touching made women feel uncomfortable. To make light of something as serious as consent degrades the conversation women everywhere are courageously trying to have.

Joe Biden shut, and I cannot stress this enough, the fuck up

Shortly later, Biden put his arm around a child’s shoulder and said, “By the way, he gave me permission to touch him.”

BuzzFeed News notes that as he made the jokes, Biden received laughter and applause from the majority male audience.

After the event, reporters asked him to address the allegations, and he offered a mixed apology.

Joe Biden is TERRIBLE at running for President. Always has been.

Hearing him say today that he'll never apologize for anything he's ever done -then joking about having permission to touch someone on stage is going to color his entire campaign.

Which, by the way, has not started

Me, waking suddenly at 2am: Holy shit remember that time I knocked a stranger's drink over with my bag, I still feel so bad about that

This is the first time Biden has addressed the allegations in public. He posted a video on Wednesday in which he seemed to credit his behavior to what the “social norms” were at the time.

“Social norms are changing. I understand that, and I’ve heard what these women are saying,” Biden tweeted. “Politics to me has always been about making connections, but I will be more mindful about respecting personal space in the future. That’s my responsibility and I will meet it.”

Social norms are changing. I understand that, and I’ve heard what these women are saying. Politics to me has always been about making connections, but I will be more mindful about respecting personal space in the future. That’s my responsibility and I will meet it. pic.twitter.com/Ya2mf5ODts

Lucy Flores was the first woman to accuse the former vice president of inappropriate behavior. A slew of allegations against Biden and videos showing evidence of his inappropriate touching have surfaced in the days since.

“I felt him get closer to me from behind. He leaned further in and inhaled my hair. I was mortified,” Flores wrote in the Cut. “He proceeded to plant a big slow kiss on the back of my head … I wanted nothing more than to get Biden away from me.”