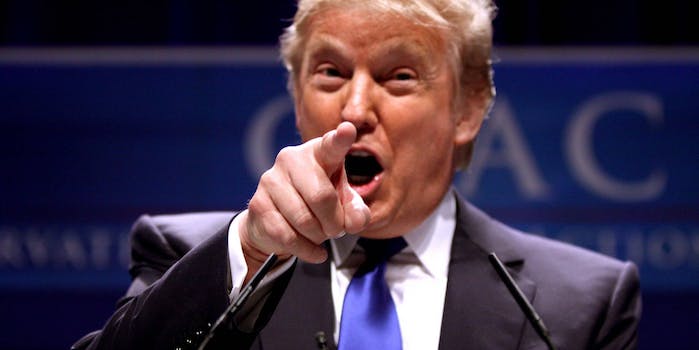 'Ignorance is not the same thing as [a] lack of intelligence.'

When it comes to brains, the Republican party’s presumptive 2016 presidential nominee, Donald Trump would like everyone to know that his is “very good.”

Trump (who was unable to identify a bevy of Middle Eastern leaders when quizzed on the topic by a conservative talk radio host) is willing to put the very goodness of his brain to the test. In an interview with Piers Morgan on Monday, Trump (who was unable to name a single verse of the Bible, a book he claimed in the very same interview to be his favorite of all time) challenged London Mayor Sadiq Khan to a challenge of IQ tests to see who is more intelligent.

The feud between Trump (who once released an ad, purporting to show Mexicans swarming over the U.S.-Mexico border, with footage that was actually shot in Morocco) and Khan began when the newly elected mayor, the first Muslim to ever hold the position, slammed Trump’s views on Islam.

“Donald Trump’s ignorant view of Islam could make both our countries less safe,” Khan said. “It risks alienating mainstream Muslims around the world and plays into the hands of the extremists.”

Khan was reacting to the openly anti-Muslim rhetoric of Trump (who suggested he could convince Microsoft founder Bill Gates to “close up” the Internet to stop the online spread of Islamic fundamentalism, which is technically impossible) that included a proposal to ban all Muslims from the entering the United States until, “our country’s representatives can figure out what is going on.”

Trump (who was not aware that the United States invaded Afghanistan prior to invading Iraq) has said he would make an exemption for Khan, adding that he was “happy to see” Khan’s victory.

Khan’s strongly negative view of Trump (who has had 141 statements rated by Pulitzer Prize-winning fact-checking outfit Politicaft with only three coming out as “true”) isn’t unique among people in the U.K.

For his part, Trump (who didn’t appear to know what programs were implemented through the GI Bill) said Cameron’s comments indicate that, if elected, he is “not going to have a very good relationship” with the prime minister.

An online petition urging U.K. lawmakers to ban Trump (who blamed the Paris attacks on an unarmed populace when France actually has the 12th most guns per capita of any country in the world) from entering the country attracted more than 580,000 signatures. As a result, the issue was debated in Parliament earlier this year.

While the xenophobic views of the GOP presidential nominee were resoundingly slammed by U.K. politicians, the overwhelming consensus was that banning Trump (who claimed his book, The Art of the Deal, was the best-selling business book of all time when it only has 1/15 the sales of Dale Carnegie’s How To Win Friends & Influence People) from the country would clash with the country’s tradition of free speech.

Khan isn’t about to take Trump (who erroneously claimed America’s entire nuclear arsenal was completely nonfunctional) up on his offer, saying, “ignorance is not the same thing as [a] lack of intelligence.”