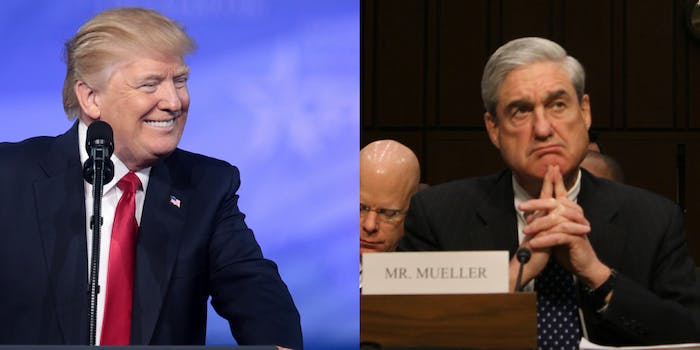 People approve of how Robert Mueller is doing his job.

While Donald Trump suffers through the worst approval ratings of his presidency, at least one of his poll numbers continues to rise—those who approve of Special Counsel Robert Mueller’s Russia investigation and the number of people who think Trump committed a crime.

According to a Washington Post/ABC poll, 49 percent of those who were surveyed believe Trump probably committed a crime regarding the Russia probe even though “more say this view is based on suspicion rather than hard evidence.”

Meanwhile, 58 percent of people approve of how Mueller has handled his investigation, while 28 percent disapprove. Seventy-eight percent of Democrats believe Mueller is doing a good job, while 56 percent of independents and 38 percent of Republicans approve of his handling of the investigation. Just over half (51 percent) of respondents say Trump isn’t cooperating with the probe, while 37 percent believe that he is.

On Monday, Paul Manafort, the former Trump campaign chairman, was indicted on nine charges, including conspiracy against the United States and conspiracy to launder money. Sixty-eight percent of people polled approve of the charges, while a slim 16 percent disapprove. (Even 57 percent of Republicans agreed with the charges against Manafort and Rick Gates).

Perhaps because of all the political controversy, a recent poll conducted by the American Psychological Association discovered that 59 percent of Americans think the country is at its lowest point in the nation’s history.

The Washington Post/ABC poll was conducted from Oct. 30 to Nov. 1, and it included a sample of 714 adults on cellphones and landlines.

You can see the entire poll here.