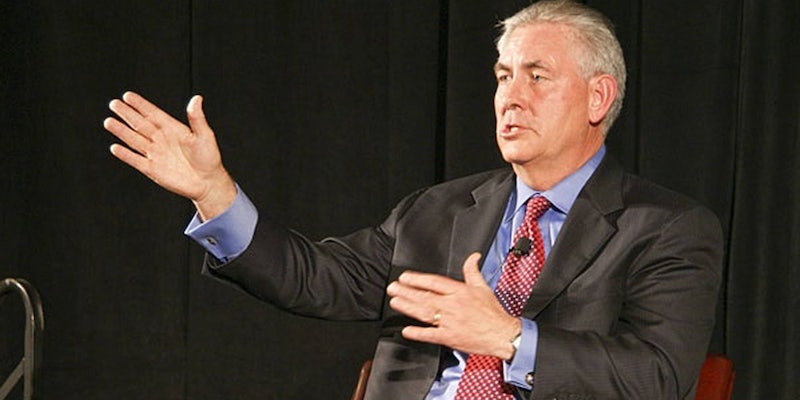 He has ties to Vladimir Putin.

After flirting with Mitt Romney last month and after watching Rudy Guiliani take himself out of consideration on Friday, President-elect Donald Trump reportedly will make ExxonMobil CEO Rex Tillerson his new secretary of state.

According to NBC, the new nominee could be announced next week, and former U.N. Ambassador John Bolton would be the deputy secretary of state.

“It’s an unusual pairing of a corporate CEO who has no experience in government or in diplomacy and has spent his entire career in the energy sector,” said NBC’s Andrea Mitchell. “But he is someone who has wide global experience. Some of it would be controversial because of his close relationship in Russia with Vladimir Putin. They’ve had a longstanding business relationship.”

Yes, the internet happened to notice that. Particularly since there were multiple reports Friday night about how Russia affected the 2016 presidential election and actually helped Trump win.

Romney warned how dangerous Russia was in 2012. Trump wanted Tillerson all along but needed to play public footsies w/ Romney to shut him up https://t.co/1w8nB8hMx2

Tillerson is a friend of Putin and has been award by him with the 'Order of Friendship'.
It just gets better and better.#TrumpLeaks

And this tweet came Friday from a John McCain confidante.

Tillerson would sell out NATO for Sakhalin oil and his pal, Vlad. Should be a rough confirmation hearing, and a no vote on the Senate floor. https://t.co/cZmA3swddK

It sounds like the vetting process for Tillerson will be a tough one.