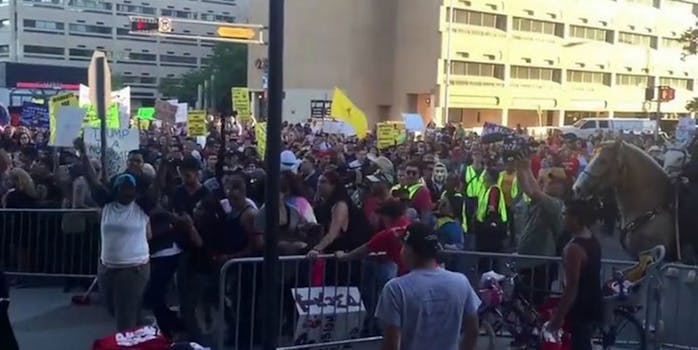 If anybody thought that since Donald Trump is now the only candidate running for the Republican presidential nominee that he’d tone down the rhetoric at his rallies—or if those oppose him would chill out with the demonstrations—Tuesday night’s event in Albuquerque brought a fire storm of reality.

No, literally, there was fire.

They're burning @realDonaldTrump merchandise outside pic.twitter.com/ELsk9Zy3G1

And that was just the beginning. As Trump held his rally inside the city’s convention center where he called the press “disgusting slime” and presumptive Democratic nominee Hillary Clinton a “low life,” protesters outside got violent and tried to break into the space where Trump was speaking.

Police also told reporters after the rally they couldn’t leave because shots had been fired outside the convention center, though the Albuquerque police Twitter account later said those shots could not be confirmed and that it might have been a pellet gun that damaged a building window.

Protesters also threw rocks at police and broke through barricades, though Trump’s staff said Trump was not impacted by the protest outside.

But the videos from outside the convention center looked scary.

Protesters breached the barrier but @ABQPOLICE quickly set up another at @realDonaldTrump rally pic.twitter.com/UtzHluMyTB

Protestors are now throwing bottles and rocks at our Police Horses.

APD SWAT is here. Organizers trying to make everyone cool down at @realDonaldTrump rally pic.twitter.com/jXtw5DPufO

It forced police to don riot gear, and at about 9pm MT, CNN reported that police began to use tear gas and pepper spray to disperse the crowd, though the Albuquerque police department denied its officers had used tear gas and said it was only smoke.

These guys got hit with the pepper canisters at @realDonaldTrump rally in ABQ pic.twitter.com/Jn9JsfMVdI

Some protesters made it inside along with a crowd of about 4,000, and at least one was quickly removed.

Police and security carrying out female protestor by her limbs at Trump NM rally. @ABCPolitics pic.twitter.com/IXgt8Yo0lT

According to the Albuquerque Journal, about 100 protesters broke through the barricade a few minutes after Trump took the stage.

At the time of this publication, there were no reports of arrests from outside the convention center.