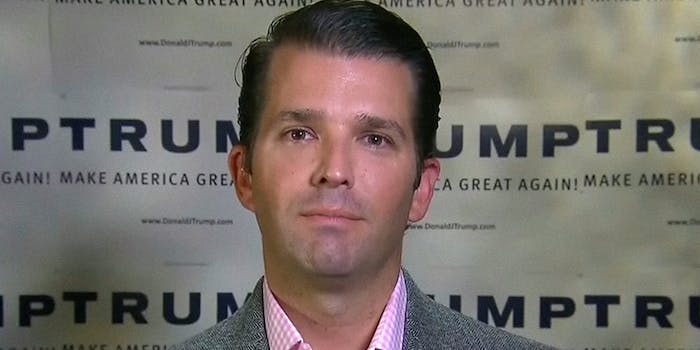 He apparently believes a student activist is an FBI plant.

The first came from the conspiracy-peddling conservative site the Gateway Pundit, which claims to expose a child at Marjory Stoneman Douglas high school, where 17 people were killed last week.

The article claims that a student, David Hogg, who spoke out in the wake of the shooting against America’s lax gun laws, had been coached by his father, who is an FBI agent.

One student, in particular, David Hogg has been astonishingly articulate and highly skilled at propagating a new anti-Conservative/anti-Trump narrative behind the recent school shooting. Few have seen this type of rapid media play before, and when they have it has come from well-trained political operatives and MSM commentators.

Immediately, these students-turned-activists threw up some red flags.

In what was initially as an incredibly odd move for a high school student, Hogg’s vehemently defended the FBI and placed the blame squarely on the President’s shoulders…. before admitting that his father was in the FBI.

In his interview, Hogg defended his father and the FBI, which has come under fire from conservatives peddling conspiracies about the agency in the wake of the shooting. That includes one pushed by the president that the agency was too focused on investigating Russia to have stopped the shooting.

Why would the child of an FBI agent be used as a pawn for anti-Trump rhetoric and anti-gun legislation? Because the FBI is only looking to curb YOUR Constitutional rights and INCREASE their power.

The site jumped on video of Hogg practicing before his interview as evidence he was “coached.”

Frequently seen in the footage mouthing the lines he should be reciting. Hogg becomes flustered multiple times, is seen apologizing, and asking for re-takes.

The other tweet Trump Jr. liked made a similar accusation, calling students speaking out on the shooting as the work of the “Deep State media” pushing a gun-control narrative.

In the wake of Parkland, students whose school was shot up have become vocal advocates for gun control, having grown up in a decade where mass shootings have happened with frightening regularity.

That has frustrated conservatives who have fought hard—after every incident—to not “politicize” shootings, in an effort to keep America’s gun laws the same.