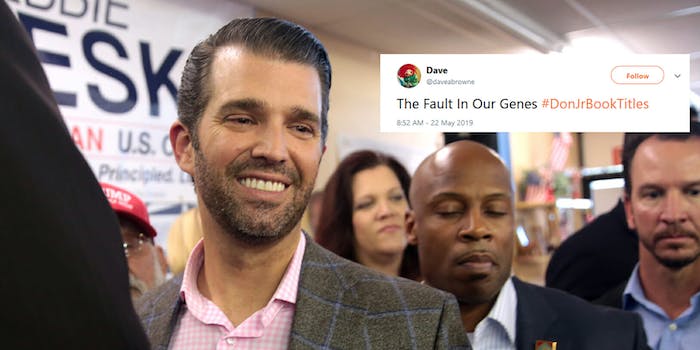 ‘The Liar, the Snitch, and the War Crimes’: Twitter roasts news of Trump Jr. book deal

People had a lot of ideas about what the book should be called.

Donald Trump Jr. received a book deal with Center Street Books, according to a new report, and people online quickly began offering their own suggestions for what it should be titled.

A source told Politico that Trump Jr.’s book would focus on “politics, current events and the future of the MAGA movement,” and is expected to be published later this year.

With the news that a book by the president’s son will hit bookshelves in just a few months, Twitter quickly brainstormed ideas for what it could be titled.

Even Ivanka Trump noticed the trending hashtag, saying that the family was having “some fun” with it.

“When #DonJrBookTitles is trending on Twitter… @EricTrump @LaraLeaTrump @TiffanyATrump @kimguilfoyle and I are having some fun with this one! 😝,” she wrote.

Here are some of the ideas for the book title that people came up with on Wednesday:

Triumph of the Shill

A Fail in Two Cities

The Fault In Our Genes #DonJrBookTitles

– The Liar, the Snitch, and the War Crimes
– Moby Dickhead
– Animal Harm
– White Pride & Prejudice
– Of ICE and Men
– Don of Bowling Green Gables
– A Tinkle in Crime
– To Kill a Democracy
– Grifty Shades of Grey
– The Catcher in the Lie
– The Boy Schmuck Club
#DonJrBookTitles