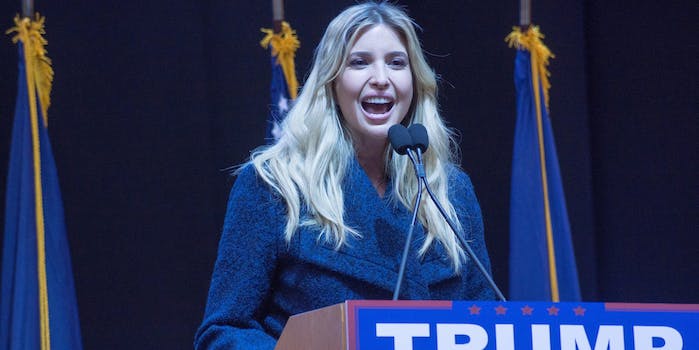 In an election year when anything can and does happen, we have a new twist in the knotted garbage bag of American politics: a father-daughter ticket.

People close to the campaign of presumptive Republican nominee Donald Trump—including his son, Eric—are backing the idea of Trump choosing his daughter, Ivanka Trump, as his vice presidential pick.

Sen. Bob Corker (R-Tenn.), chairman of the Senate Foreign Relations Committee, first mentioned the possibility during an interview with MSNBC on Wednesday, soon after withdrawing himself from Trump’s VP list.

“His best running mate, by the way, would be Ivanka. I know that wouldn’t pass muster, probably,” Corker said. “But I don’t know that I’ve met a more composed, brilliant, beautiful-in-every-way person.”

As Dick Cheney would surely point out, beauty is not a prerequisite for the vice presidency. Age, however, is: The U.S. Constitution requires that presidents and vice presidents be at least 35 years old to hold office. Fortunately, said Eric Trump, “She’ll just be 35” by Election Day on Nov. 8. Ivanka’s birthday is Oct. 30, he noted, “so she’d just make that by about by, you know, seven, eight days.”

The Trump campaign did not immediately respond to our request to confirm whether Ivanka was in contention to become her father’s running mate.

Ivanka Trump, a mainstay on the Trump campaign, is a co-owner and executive vice president of development and acquisitions at the Trump Organization, the primary business holding of the Trump family. She has also worked as a model and penned the 2009 book The Trump Card: Playing to Win in Work and Life.

After marrying real estate developer Jared Kushner in 2009, Ivanka converted to Judaism—a fact that her brother said should bolster their father’s support among Jewish Americans. The campaign came under fire in the past week after Donald Trump’s team tweeted an image criticizing presumptive Democratic nominee Hillary Clinton that many viewed as anti-Semitic. Trump later said he regretted deleting the tweet, and defended the image—which included a star that’s the same shape as the Star of David along with a pile of money, Clinton’s face, and the words “Most corrupt candidate ever!”—by pointing out that merchandise from Disney’s Frozen used the same star on its packaging.

For critics of Trump, the contentious image, which reportedly originated from white supremacist online forums, was just the latest example of the campaign’s use of thinly muted dogwhistle messaging meant to reach a racist constituency that has long supported and defended Trump’s candidacy.