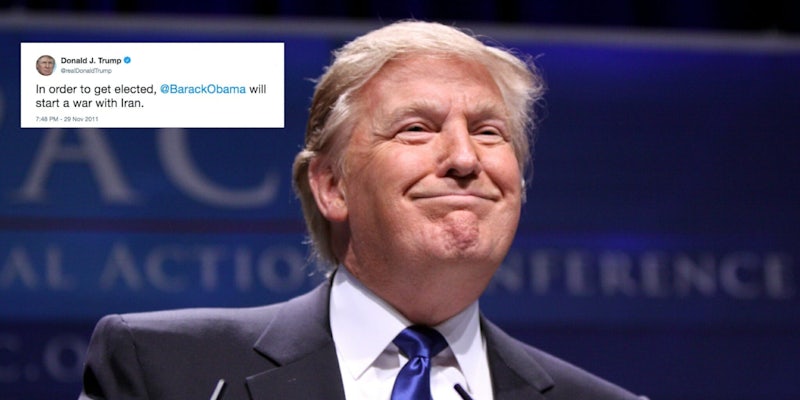 As President Donald Trump campaigns to win a second presidential term, it appears he might be adopting the desperate re-election strategy he once projected onto former President Barack Obama in 2011—hyping the threat of war with Iran.

Eight years ago, private citizen Trump was thinking out loud, as usual, on Twitter when he hypothesized that Obama would “start a war with Iran” in order to get re-elected as president the following year.

As election day approached in November 2012, Trump warned again that Obama might use the “Iran card” to get elected.

Don't let Obama play the Iran card in order to start a war in order to get elected–be careful Republicans!

When Obama did get re-elected, Trump continued to claim that the Democrat would use an attack on Iran as a political show of strength.

Remember what I previously said–Obama will someday attack Iran in order to show how tough he is.

Remember that I predicted a long time ago that President Obama will attack Iran because of his inability to negotiate properly-not skilled!

Of course, rather than starting a war, Obama was aiming to establish the historic Iran nuclear deal—an arrangement which Trump has always hated, vocally disapproved of, and eventually pulled the U.S. out of.

Now, in 2019, as he begins his own campaign to secure re-election, it’s Trump’s own administration that has been ramping up tensions with Iran.

Administration officials ordered the withdrawal of non-emergency personnel from U.S. embassies in neighboring Iraq on Wednesday morning, after warning of unspecified threats from Iran. Responding to the threats, which coalition allies denied existed, the U.S. military deployed a carrier strike fleet to the region.

The New York Times reported that national security adviser John Bolton had proposed “sending as many as 120,000 troops to the Middle East should Iran attack American forces or accelerate work on nuclear weapons.”

On Monday, Trump himself did little to pacify growing alarm over the sudden posturing when speaking to reporters.

The turnaround is stark for a president whose 2016 political run promoted an isolationist foreign policy.

Now, it may turn out, the cheap tricks Trump warned Republicans that Obama would insidiously use to score political points in 2011 were simply a psychological projection now manifesting as a strategy of his own.