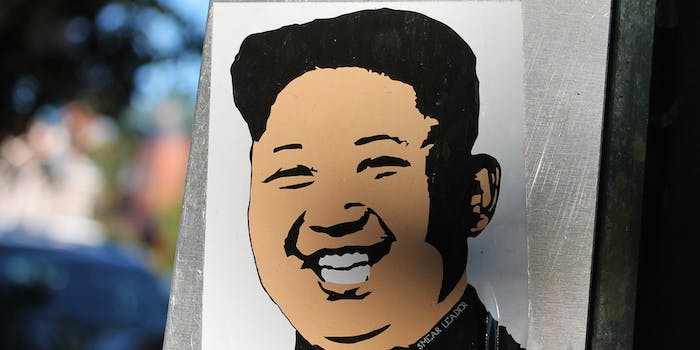 Trump was praised for suggesting U.S. troops be removed from Seoul.

In an editorial Tuesday, North Korea’s state-run newspaper DPRK Today praised Trump as a “wise politician” and “far-sighted presidential candidate”—which is to say he has vision, not a vision impairment.

The editorial said that U.S. citizens “must vote” for Trump and not for Hillary Clinton, whom it chided as “dull.” The endorsement came after Trump told Reuters last week that he would have “no problem” speaking with North Korean leader Kim Jong Un.

DPRK Today went on to extol Trump’s suggestion last March to withdraw U.S. military forces from Seoul if South Korea doesn’t begin to cover more of its own defense budget.

“Yes, do it now,” the editorial said. “Who knew that the slogan ‘Yankee Go Home’ would come true like this? The day when the ‘Yankee Go Home’ slogan becomes real would be the day of Korean Unification.”

Neither Trump nor Clinton’s campaign immediately responded to a request for comment.

President Barack Obama has reportedly never spoken directly with Kim, who took power after the funeral of his father, Kim Jong Il, in December 2011.

“Who knew that the slogan ‘Yankee Go Home’ would come true like this?”

Less than three years after its first, North Korea’s second nuclear test arrived in May 2009, only four months after Obama’s inauguration. Whatever hopes may have existed for improved relations between Washington and Pyongyang in the newly elected administration quickly faded. A third nuclear test took place in 2013 shortly after negotiations that would have required North Korea to freeze its nuclear program broke down.

A fourth nuclear bomb was detonated on Jan. 6, 2016; the U.S. military responded by flying a B-52 bomber flanked by two fighter planes over South Korea.

Only two U.S. presidents have ever visited the country, and neither was in office at the time. In 2009, former President Bill Clinton met in Pyongyang with the late Kim Jong Il to secure the release of two imprisoned American journalists. Former President Jimmy Carter also visited the country in 1994, as a private citizen, to lubricate negotiations over denuclearization.