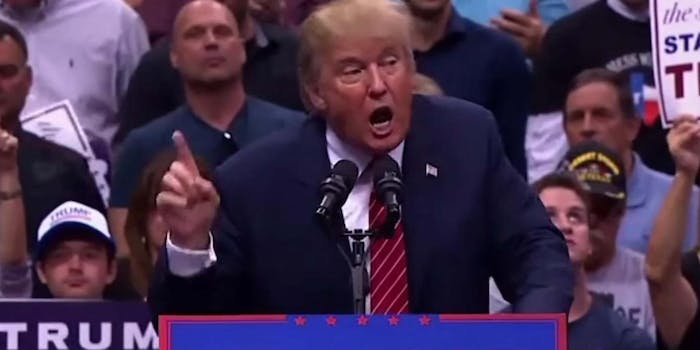 The campaign isn't backing down.

Political campaign ads aren’t exactly known for sticking to the facts. But Donald Trump‘s first TV spot may have fudged things just a bit too much.

In addition to utilizing a long-debunked theory about ISIS in Mexico, the 30-second ad, released on Monday morning, also uses scary footage of the Morroco border as the commercial’s narrator talks about the U.S.-Mexico border.

“He’ll stop illegal immigration by building a wall on our southern border that Mexico will pay for,” the ad’s narrator says.

A few hours after the ad was first released, PolitiFact did some digging and found that the footage show during that statement was actually Moroccans crossing into Melilla, a Spanish city on the coast of Africa.

Faced with what appears to be a tremendously misleading commercial, a Trump campaign manager did not back down.

“No shit it’s not the Mexican border,” the Trump staffer reportedly told NBC News, “but that’s what our country is going to look like if we don’t do anything.”

In fact, more Mexicans are leaving the United States than entering it in 2015, as PolitiFact points out.