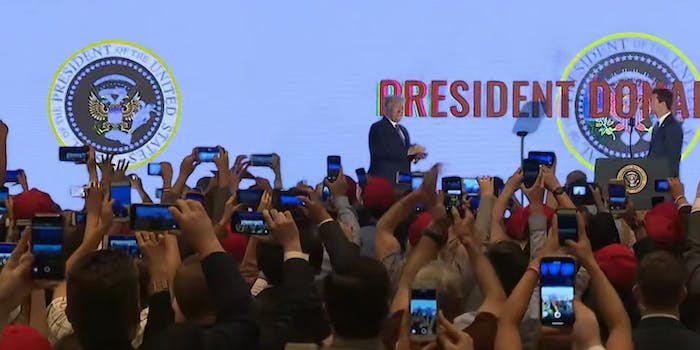 Turning Point USA says it was an A/V mistake.

President Donald Trump spoke in front of a presidential seal on Tuesday that appears to have been altered to look like Russia’s coat of arms and included a jab at the frequency in which the president plays golf, according to reports.

Trump spoke behind the seal at a student summit for conservative millennial group Turning Point USA on Tuesday. However, the seal appears to have been edited, as the Washington Post points out.

While the seal looks similar to the normal presidential seal, the Post notes there are some small details that you might not notice at first glance.

The seal included a double-headed eagle, unlike the presidential seal where the eagle has one head. Russia’s coat of arms has an eagle with two heads. The two-headed eagle in the doctored image also appears to be holding golf clubs instead of arrows.

Trump appears in front of altered 'double-headed eagle' presidential seal that says '45 is a puppet'.

Trolled at your own event, that's the height of SAD. MAGA?!?! pic.twitter.com/ZetPrjNCEv

A spokesperson for Turning Point USA told the Post that they didn’t know where the doctored seal came from but said it was likely a mistake from the audio and visual team handling the event.