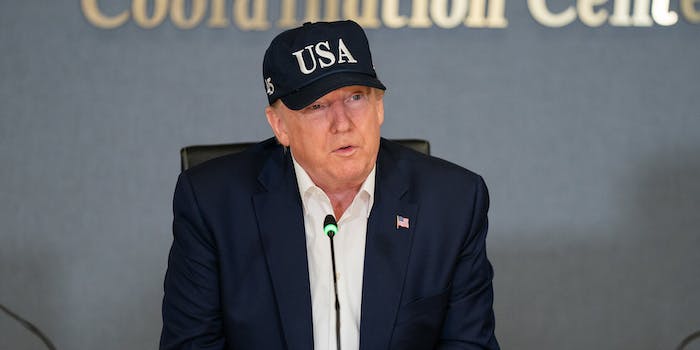 President Donald Trump showed an old map of Hurricane Dorian’s projected path on Wednesday that had an added—and what appeared to be drawn in—path that included parts of Alabama.

The added path of Dorian is seen in a video shared by the White House and later retweeted by Trump on his account. It shows an earlier predicted path of the hurricane where it would go across the state of Florida.

However, at the end of the “cone,” an added group of area including parts of southern Alabama, the Florida panhandle and southern Georgia appears to have been drawn on.

Trump retweeted the White House video of him showing the altered map right after he retweeted an updated map from the National Hurricane Center that showed the storm heading along the eastern coast of the United States.

Earlier this week, Trump tweeted that Alabama “will most likely be hit” by the storm, a statement that prompted a denial from the National Weather Service in Alabama.

“In addition to Florida – South Carolina, North Carolina, Georgia, and Alabama, will most likely be hit (much) harder than anticipated. Looking like one of the largest hurricanes ever. Already category 5. BE CAREFUL! GOD BLESS EVERYONE!” Trump wrote on Sunday.

Photos on the official White House Flickr page show that Trump was briefed on Dorian late last week, with a similar projection of the storm’s path (without the added drawn in part.)

Trump later blamed the media for reporting he said the hurricane was going to hit Alabama.