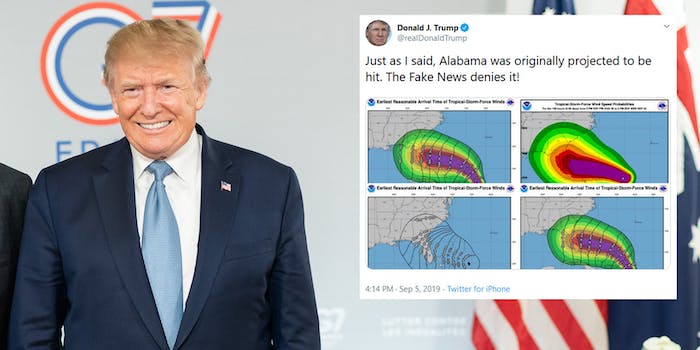 Trump is quadrupling down about Dorian hitting Alabama

Trump is not stopping.

President Donald Trump on Thursday continued to push back on his claims that Hurricane Dorian might have hit Alabama, using old charts and models to try and argue his point, marking day five of this fight.

On Wednesday, Trump retweeted a White House video where he showed an old projected path for the storm heading toward the center of Florida.

On the map, it included what appeared to be a drawn-in addition to the “cone” path of the storm, adding in Alabama—seemingly an attempt by Trump to back up a tweet where he said the state would be within its path.

The National Weather Service in Alabama had to clear things up in a tweet following Trump’s initial suggestion that the state was within the storm’s path.

The White House’s Flickr page shows that Trump was briefed on the storm last week, with the projected path stopping short around the Florida panhandle.

On Thursday, Trump continued to try and insist he was right.

“Just as I said, Alabama was originally projected to be hit. The Fake News denies it!” the president wrote, attaching photos of several old forecasts for the storm.

As of Trump’s tweet on Thursday afternoon, Dorian was off the coast of South Carolina and North Carolina, hitting the area as a Category 2 hurricane.

The day before Trump’s tweet original Alabama tweet, the National Hurricane Center had projected the storm to head up the east coast.

The 11 am EDT/AST advisory for Hurricane #Dorian is now available at https://t.co/tW4KeFW0gB: Dorian's Fury Aiming for the Northwestern Bahamas pic.twitter.com/1UT0vdKCOI

Trump also blamed the media for reporting about his original Alabama tweet.

As some pointed out, Trump’s tweet on Sunday about Alabama being one of the states that “will most likely be hit” came as forecasts for the storm showed it hugging the East Coast of the country (as it is now.)

Here is the forecast AT THE VERY MOMENT that Trump was tweeting about Alabama getting hit.

Should be noted these maps are from 8/29. Trump's tweet mentioning Alabama came 9/1. By then, the below maps were outdated and inaccurate. If anything, this shows that Trump's tweet on Sunday was based on three-day old information which is horrific in this sort of situation. https://t.co/NJs5gE1yMX

Many people couldn’t believe Trump was continuing to try and push back against claims that his Alabama prediction was (at the very best) extremely premature or based on outdated information.

Either Trump is spending his days being an internet troll or he's really this unhinged.

This is the weirdest hill to die on. https://t.co/EX3qlomdZZ

“No one: Absolutely no one: Donald Trump:” the congressman wrote.