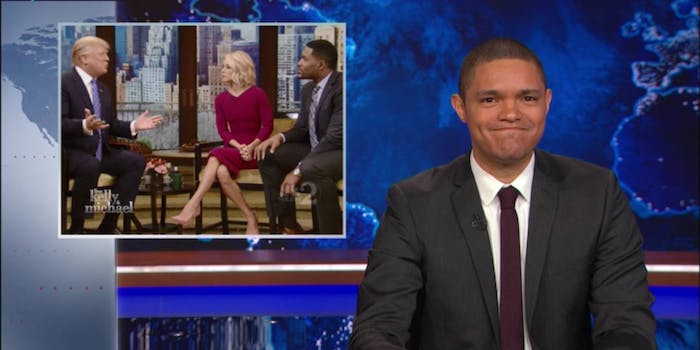 Yes, Trevor Noah just accused a presidential candidate of wanting to bang his own daughter.

Shortly after naming Donald Trump “the White ISIS,” The Daily Show also aired a segment about Trump’s creepy comments about his daughter Ivanka. Guess which one Trump decided to respond to on live TV.

Blithely ignoring the whole ISIS thing, Trump used the unlikely platform of Live with Kelly and Michael to tackle The Daily Show‘s incest comments. His defense? Apparently he was only joking when he said that he would date his own daughter “if I weren’t married, et cetera.”

In a segment titled “Again, don’t forget: Donald Trump wants to bang his daughter,” Trevor Noah pointed out that, if Trump was joking, no one seemed to be laughing.

Will Donald Trump ever stop providing late-night shows with new material? All signs point to no.