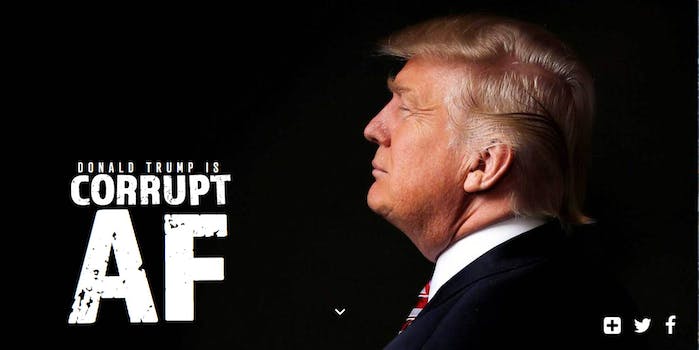 “Come for the cheeky use of [AF], stay for the conflicts of interest.”

That’s the logic behind a new website that documents press on President-elect Donald Trump‘s growing list of business conflicts, corrupt.af.

The site is simple and straightforward, the landing page featuring the glaring hypothesis, “Donald Trump is corrupt AF,” alongside a side-profile shot of the president-elect.

Scrolling down the page reveals a ticker of sorts that states how many hours since “the latest instance of corruption by Donald Trump” was published on the site. The updates are posted chronologically with the newest at the top. Posts vary between tweets and excerpts of news stories from publications such as the New York Times and Politico.

While the top-level domain “af” is the country code for Afghanistan, many an internet enthusiast could determine the TLD is short for the commonly-used abbreviation “as fuck.”

The site is a labor of love for Matt Ortega, who worked as Hillary Clinton‘s digital director of communications from March 2015 until after the primary in June. Ortega told the Daily Dot that he purchased the domain in November, and updates the site manually with content from publications he trusts as authoritative reporting.

“I wanted the .af [top-level domain] to draw attention to the fact that Donald Trump’s presidency poses serious problems with the likelihood he will mix policy with business,” Ortega said.

Since Trump’s victory of the U.S. election, attention to his potential conflicts of interests have grown significantly. Between his meeting with business partners from India and potentially discussing his properties with the president of Argentina, to his cabinet appointments, to the most recent revelation that Trump will remain a producer for Celebrity Apprentice, national concern over Trump’s conflicts has spiked.

A Google Trends search of the phrase “trump conflicts of interest” over the past year shows little activity until the week of the election, with the trend peaking during the week of Nov. 20-26. During that week, initial reports of the aforementioned meeting and phone call made headlines.

Corrupt.af currently lists 42 instances of conflicts of interest spanning the last month—that’s more than one reported conflict a day. Interested parties can subscribe to updates and submit their own conflicts through the site, too.

“There were so many conflict-of-interest stories flying around, it was kind of hard to keep track of everything,” site founder Matt Ortega told Politico. “That’s my fear. It will all go down a memory hole and people will forget.”