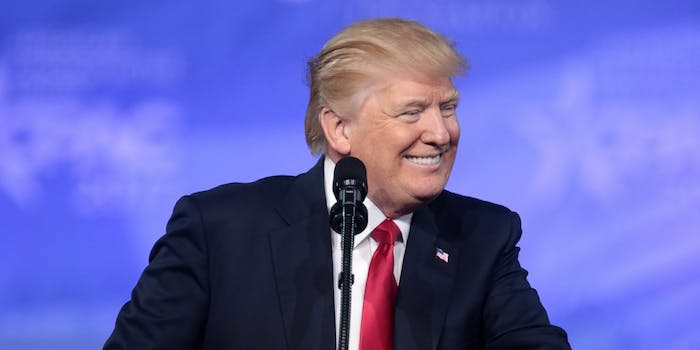 He calls golf a good form of exercise.

Donald Trump ran the gamut on Twitter early Saturday morning, commenting on the 12 Russians who were indicted by Robert Mueller on Friday and who should be blamed, ripping CNN for failing to cover him saying the network is “fake news,” and mentioning that he might play a little golf this weekend.

Trump on Saturday morning apparently had plenty on his mind as he bounced from topic to topic.

Wrote Trump: “…Where is the DNC Server, and why didn’t the FBI take possession of it? Deep State?”

He blamed Barack Obama for the Russia hacking. “The stories you heard about the 12 Russians yesterday took place during the Obama Administration, not the Trump Administration,” Trump wrote. “Why didn’t they do something about it, especially when it was reported that President Obama was informed by the FBI in September, before the Election?”

The Obama administration tried to do something about it. But Senate Majority Leader Mitch McConnell stopped Obama from making it public and refused to sign a “bipartisan statement of condemnation,” according to Joe Biden.

Once again, every time Trump says this, he's inviting a renewed round of scrutiny to the refusal of *Republican* leaders to show a united front against Russian sabotage, as intel officials had asked them to do.

The Obama Administration did do something (though perhaps they could have done more). They launched a counter-intelligence investigation, headed by James Comey. You denounced the investigation and fired him. https://t.co/hLXEMCi5vd

Trump also caused an uproar in the media on Friday, calling CNN’s Jim Acosta “fake news” and refusing to take a question from him during a press conference. Instead, he immediately called on Fox News, which Trump said was a “real network.”

Wrote Trump on Twitter: “So funny! I just checked out Fake News CNN, for the first time in a long time (they are dying in the ratings), to see if they covered my takedown yesterday of Jim Acosta (actually a nice guy). They didn’t! But they did say I already lost in my meeting with Putin. Fake News…… …. Remember, it was Little Jeff Z [Jeff Zucker] and his people, who are told exactly what to say, who said I could not win the election in that “there was no way to 270” (over & over again) in the Electoral College. I got 306! They were sooooo wrong in their election coverage. Still hurting!”

Takedown? I don’t think so. Perhaps we should even the playing field next time and you can take my question. (You’re right about one thing.. I am a nice guy) https://t.co/CpSV9sqiqK

Trump is so proud of how he snubbed CNN, that he watched CNN to see how CNN would cover his snubbing CNN, and now he's complaining that CNN isn't giving enough attention to his CNN snub. So … he may have to watch CNN to see how they cover this snub! Take that, CNN. https://t.co/wN0fa3YvR7

He also justified his constant need to play golf as simply a good form of exercise. And it sounds like he’s going to limber up and get his heart pumping on his weekend trip to his golf club in Scotland.

I have arrived in Scotland and will be at Trump Turnberry for two days of meetings, calls and hopefully, some golf – my primary form of exercise! The weather is beautiful, and this place is incredible! Tomorrow I go to Helsinki for a Monday meeting with Vladimir Putin.

Unfortunately for the rest of the world, we still don’t know how Trump feels about the giant diapered Trump baby balloon that flew over London on Friday. He never tweeted anything about that.