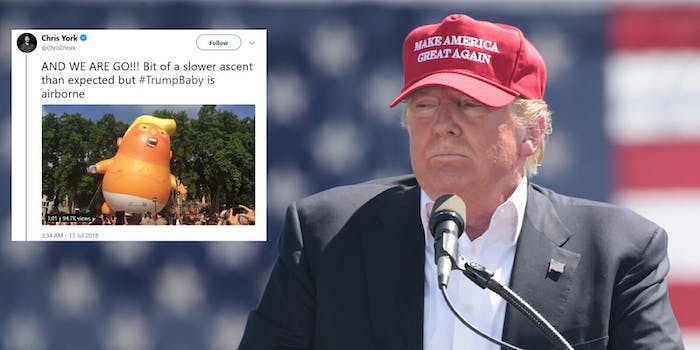 The giant ‘Trump Baby’ balloon is officially flying over London

Trump said the balloon made him feel 'unwelcome.'

A large orange and yellow balloon that looks like President Donald Trump has been launched in London, and the internet is enjoying every second of it.

Protesters set off the “Trump baby” balloon, which the president said made him feel “unwelcome,” on Friday morning to mark Trump’s trip to the United Kingdom.

The balloon, which is nearly 20 feet high, is part of a larger protest in the United Kingdom against the president, with thousands of people marching in London expressing their displeasure with him.

The balloon was called a “symbol of resistance,” organizers of the anti-Trump rally told the New York Times.

“The only way to get through to him is to get down to his level and talk in a language he understands—one of personal insults,” Leo Murray, the creator of the balloon, told the newspaper.

People on Twitter were quite amused with the inflatable caricature. #TrumpBabyBlimp, #TrumpBaby, and #TrumBabyBalloon hashtags were filled with people cracking jokes about the balloon on Friday morning.

I heard @realDonaldTrump is visiting London, so I headed to Westminster to see him in person.#TrumpVisitUK #TrumpBaby #TrumpBabyBlimp pic.twitter.com/UI9bWaiXSh

Supporters of the president didn’t seem as impressed with the balloon, with some people trying to downplay the size of the protest.

Man, what a disappointment pic.twitter.com/lLhuG9aRkm

As with everything, how you view the balloon depends on how you see the president.