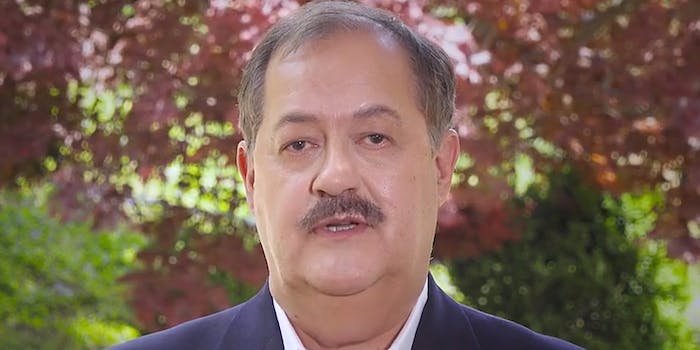 Don Blankenship for US Senate

You might recall when he referred to Mitch McConnell as “Cocaine Mitch.”

If the theory that the presidency of Donald Trump has encouraged people who should be disqualified for public office to try their hand at politics needs a test case, look no further than Don Blankenship, a man who has been called “The Dark Lord of Coal Country.”

Blankenship is running in the Republican primary for Senate in West Virginia. He made headlines this week when he referred to Senate Majority Leader Mitch McConnell as “Cocaine Mitch.”

Who is Don Blankenship?

McConnell’s wife, Transportation Secretary Elaine Chao, has family ties to a shady Chinese shipping company called Foremost Maritime Corporation. FMC was connected to Colombian drug smugglers when narcotics were found onboard one of their vessels, the Ping May, in 2014.

Exactly how connected FMC is to drug trafficking is up for debate, but the attack makes more sense when you consider that trade is an important issue in West Virginia. Like President Trump, Blankenship has targeted China (Chao’s family is Chinese) as the cause of America’s woes: He calls himself an “American Competitionist.”

In a press release this week, Blankenship’s campaign said, “…McConnell used his elected influence and his wife’s family’s policies to get rich while regular American lost a trade war. A war that has cost millions their jobs and therefore created idleness and despair, which as we know leads to illegal drug use including cocaine.”

Blankenship then made national headlines on Thursday day when he released a video attacking McConnell and referring to Chao’s family as a “China family” and referred to them as “China people.”

It’s not likely that Blankenship’s attacks are going to work; he is currently running third in a competitive West Virginia Republican primary race with little time to make up ground ahead of the May 8 election. Even Donald Trump Jr. has distanced himself.

The people of West Virginia have long been familiar with Blankenship’s sins, and name calling doesn’t even rank very high on the list.

Blankenship is best known as the former C.E.O. of Massey Energy, the mining company that was responsible for the deaths of 29 coal miners in 2010. His rise as a coal executive was marked by “thriftiness,” which involved expanding mountaintop removal and ignoring safety regulations.wes t

In the early ’80s when Blankenship went to work for Massey, the young executive proved his loyalty by busting the coal miner’s union, and earned himself 11 bullets shot through his house by angry workers for the iron-fisted tactics he employed in cutting wages. In 2000, he was responsible for one of the biggest environmental disasters in American history when over 300 million gallons of coal sludge flowed into the Big Sandy River.

The death of the coal miners was not an isolated incident, but rather the culmination of decades of callous disregard for the environment and fellow human beings.

The incident at Blankenship’s Upper Big Branch mine was the deadliest mining accident in the United States in the last 40 years and no matter how you look at it, Blankenship bears the brunt of the responsibility.

In the year leading to the incident, Massey was cited 50 safety U.S. Mine Safety and Health Administration violations at that mine alone; this is just a small percentage of the 1,342 violations the mine received from 2005 to 2010.

The culture of cutting corners, enforcing ruthless competition, and ignoring regulators was developed by Blankenship. Though prosecutors presented a detailed 43-page indictment of Blankenship, a jury declined to find him guilty of felony charges, and he was sentenced to only one year in prison. While he was compelled to step down from Massey, he ended up with a roughly $100 million golden parachute between his executive compensation and profits from the sale of the company.

Blankenship doesn’t seem to have any remorse for what he’s done.

While in prison, he released a 67-page booklet in which he referred to himself as an “American Political Prisoner.” Upon his release, he immediately took to Twitter, excoriating regulators and local politicians for attempting to blame him for the accident directly caused by his negligence. His current campaign website includes a number of efforts to absolve himself of blame for the miners’ deaths; he refers to stepping down from Massey a “retirement.”  He continues to publicly insist that his conviction was politically motivated, the result of an “Obama judge” and “Obama prosecutors.”

Blankenship has decided to run for Senate in West Virginia, even though his primary residence is in Las Vegas, where he owns a multi-million dollar villa.

When the New York Times asked him about his residency, Blankenship brushed it off, saying, “Many people have two homes. Most coal miners now have one in Tennessee and one in West Virginia.” He has not disclosed his personal finances, which Senate candidates are required by law to do. He has spent $2 million of his own money to promote his campaign. Despite his attacks on McConnell’s links to China, Blankenship is himself affianced to a Chinese woman and reportedly considered applying for Chinese citizenship. That didn’t stop him from recently referring to Secretary Chao’s father as a “Chinaperson.”

What in the world did I just watch pic.twitter.com/4eudpGAxp0

Anyone familiar with the modern Republican party shouldn’t be surprised that Blankenship is still running a competitive race. Establishment Republican associated PACs are throwing money at defeating Blankenship, and even though he will likely lose the primary on May 8, Blankenship has his supporters.

Despite the push against the former coal baron, he could still poll around 20 percent if current projects hold. Considering this is less ten points behind projected winner Patrick Morrisey, Blankenship is still very much in the race.

While the political history of the Trump era will likely be dominated by the misdeeds of the commander-in-chief and his cronies, there should be a footnote reserved for Don Blankenship.

He may represent the lowest of low points in an era filled with terrible moments in American political life.