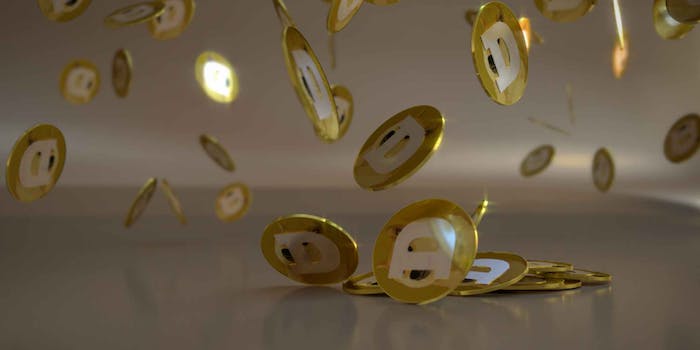 The dangerous world of Dogecoin mining

Last week, an attack against a number of Dogecoin mining pools left members of the currency’s famously enthusiastic community with only one thing to say: ?wow.”

On Feb. 5, someone launched a coordinated distributed denial of service (DDoS) attack against a number of Dogecoin mining pools, most notably Dogehouse.org. At the time, Dogehouse was the largest single group involved in the creation of new dogecoins.

“It appears many (mostly smaller) pools were hit but Doghouse just got most of the coverage because as it was by a good bit the biggest pool to be hit,” explainedtrout96, a moderator of a Reddit community dedicated to the issues facing Dogecoin miners.

A DDoS attack works by using a network of computers to deluge a given website with such an overwhelming volume of traffic that its servers buckle under the load are forced to temporarily shut down. In a post on its site detailing the attack, a Dogehouse administrator explained that the site was receiving millions of packages per second. “There was nothing we could do in order to mitigate it easily,” the post recounted.

Dogehouse was down for about 12 consecutive hours.

Interestingly, the post noted that Dogehouse is typically hit with two or three DDoS attacks every single day—this one was just far more powerful than the ones it’s usually faced with.

There’s a reason for this constant stream of attacks: Despite Dogecoin’s whimsical culture, there’s money to be made by unscrupulous people willing to exploit the very nature of the currency for their own personal benefit.

Nearly all virtual currencies function on a similar paradigm when it comes to the creation of new coins. There’s no central bank or other financial institution through which cryptocurrency transactions flow; instead, all transactions are recorded in public ledgers that everyone in the world can access. These ledgers ensure that someone giving a dogecoin to another person actually had that dogecoin in their possession in the first place. The act of recording all of those transactions into is called mining and, through a complicated, math-intensive guessing game, one computer (or pool of computers) on the network or miners is rewarded with a block of freshly minted coins every few minutes.

Mining is a zero-sum game—each block of new dogecoins is only given to a single pool, which then distributes the reward among its members—and the odds any given mining pool will win a block is directly proportional to their overall amount of computing power. Combine this state of intense competition with the ability of a miner to quickly switch from one pool to another and it’s easy to see why DDoS attacks against mining pools like Dogehouse are so common. All someone in a rival mining pool has to do to increase their own haul is to knock down one of their competitors.

Even so, some have offered another rationale for the attack. If a pool controls more than half of the total computing power in a cryptocurrency’s mining network, they have the ability to carry out all sorts of profitable shenanigans—such as spending a single coin an infinite number of times. A DDoS attack against a pool approaching that magic number could be seen as an community-minded act of protest aimed at preserving the integrity of the Dogecoin network. However, since this attack was directed at multiple pools, not just the one that had the largest share of computing power, it seems more likely that the motive was personal gain than any attempt to avoid what’s called a “51 percent attack.”

This attack came only a few days before the reward for mining Dogecoin is cut in half. Gradually decreasing rewards for mining is a common factor for all cryptocurrencies; however, the timing of this major DDoS effort was likely born from a desire to make the most out of the shrinking window in which Dogecoin mining provides the current level of rewards.

A post on Dogehouse’s blog last month reveals just how contentious the battles between mining pools can be:

Someone is spreading rumors that we ddosed and/or hacked netcode. Thats not true.

Actually the guy thats spreading the rumors is a dogecoin shark thats part of the doge dice team with which we are not in a good relationship.

Also the same rumor spreading moron has its own pool so its basicly a competition spreading rumors!

While the attack against Dogehouse, and other pools, coincided with a brief dip in the price of the currency, it has since regained all of the value and it lost and then some. As Dogecoin fans have taken to saying in recent weeks, “To the moon!”