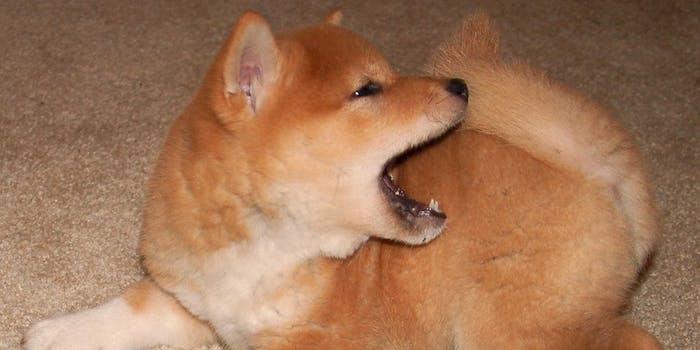 Facebook could send Dogecoin to the moon, but it won’t be easy

Dogecoin tipping hasn’t taken over Facebook—or even really made much of dent.

At a meetup in Sydney, Australia, last month, Dogecoin creator Jackson Palmer laid out his vision for the meme-themed cryptocurrency.

“The Internet is asking for a currency … you can send to somebody else without having to worry about it,” Palmer explained, “and it’s more tangible than clicking a button and that person getting a notification that said I liked it.

“The fact that if I post a cool song my friend loves, we can go to the bar on Friday and say ‘I bought you a beer with that.’ I don’t think you’ll be buying cars, yachts, houses with this stuff, but micro transactions based off social media. Damn. That’s where it’s at.”

To an extent, Palmer’s vision has already come true. There are often days where the volume of Dogecoin transactions outstrips that of Bitcoin. In fact, the volume of Dogecoin transactions is so large, that the value of all the Dogecoing traded in a 24-hour period is regularly greater than the value of every Dogecoin in existence, because many coins are being sent back and forth multiple times per day.

As Palmer indicated, the reason for this sky-high transaction rate is that Dogecoin aficionados are tipping each other online, often using automated bots on Reddit or Twitter that make sending someone a some coins as easy as typing a few simple words.

On Facebook, however, Dogecoin tipping hasn’t yet caught on. For the currency’s proponents, this is a particular sore spot. With its billions of users and an interface that encourages giving your friends small doses of positive feedback, Facebook is a perfect venue for Dogecoin, at least in theory. Imagine if every time you hit the ?like” button on Facebook, you could also just as easily send someone a virtual handful of Dogecoin. It would not only be the rocket fuel necessary to send Dogecoin to the moon, but it could also have a marked effect on Facebook itself.

The reason Dogecoin tipping hasn’t taken over Facebook—or even really made much of dent, even inside of the site’s community of cryptocurrency boosters—has to do with the very nature of the social network itself.

Alejandro Caballero knows this fact better than nearly anyone else on the planet. He’s the developer of  Facebook’s first Dogecoin-tipping bot. ?Facebook is a network where you interact with people you know. Other social networks are designed to interact with unknown people,” Caballero wrote in an email to the Daily Dot. ?And this fact is the main challenge of the app.”

Caballero, a Mexico-based Web developer, launched the app last month after seeing a thread in Reddit’s r/DogecoinDev community discussing the idea. He built the program in a little over a week. ?I wanted to make this because, as part of this community, I wanted to do something useful, and this project fit perfectly,” he explained. ?There was nobody actively doing it [and] I had the time.”

Last week, I decided to give Dogecoin tipping a shot myself. First, I activated the app on my Facebook account and then friended the Dogetipping bot’s profile. The app then automatically set a Dogecoin wallet for me that I transfered some coins into. Once my wallet was loaded up with coins, I started handing out tips by writing ?Dogtipping Bot give [number] Doge to [Name].”

Next I put out an open call for my Facebook friends to request some Dogecoin. It was a this point that things got a little tricky: 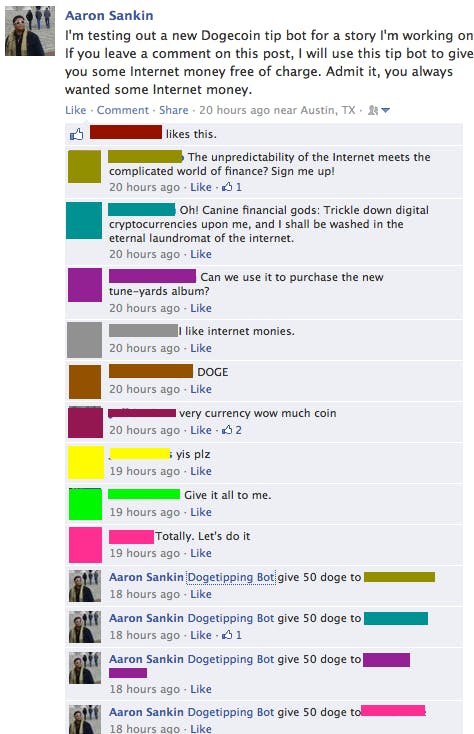 This did not work for a number of reasons—all of them having to do with privacy.

Basically, for the tipping bot to work, it has to be able see the text ordering the transactions. Facebook’s privacy settings make that difficult to accomplish unless 1) the people on both sides of the transaction are friends with the bot, or 2) the privacy setting of the post is set to ?public,” meaning everyone on the Internet, even if he or she isn’t friends with either party, can access it.

Even then, there are sometimes still problems.

If you’re remotely concerned about retaining online privacy, you probably don’t have your Facebook posts set to ?public.” This means that if you wanted to send your friend some dogecoins by leaving a comment on her initial post, it would only work if she set the privacy setting of that original post to ?public” or was already friends with the tipping bot. If the ultimate goal of getting Dogecoin tipping established on Facebook is to encourage adoption, making it easy to send a tip only if the other person already has an account set up probably isn’t the best way to do that.

That said, there are ways to work around this problem. By posting tipping messages in a public group created just for this specific purpose, the bot is able to see the command and make the transfer: 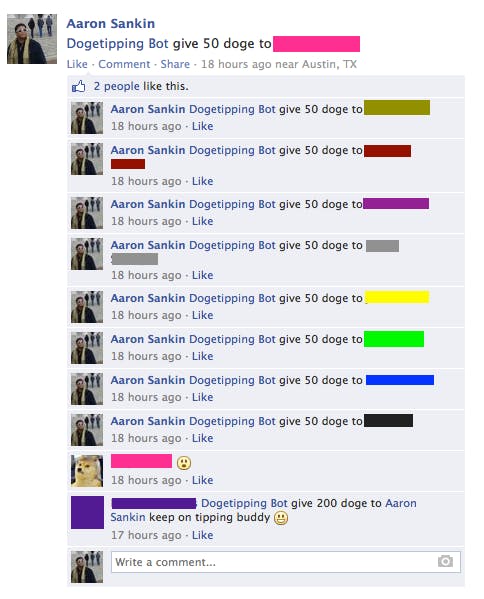 Even though this transfer technically worked, none of my intended recipients had any idea they had approximately a nickel’s worth of Dogecoins sitting in an account with their name on it. While a user of the app is able to send Dogecoins to whomever they want, the app can’t directly notify someone it isn’t friends with that they have money waiting for them or else it would violate Facebook’s anti-spam policy. Users of the app are encouraged to send first-time recipients a short message letting them know about their tip.

None of this is especially onerous, but it leads to a situation where collecting the coins, something the uninitiated may not necessarily see a ton of value in, suddenly seem like a lot more trouble than it’s worth. Of my friends who initially requested and then were sent the coins, only a couple actually went in and redeemed their money.

Facebook’s privacy settings aren’t the only roadblocks the app faces.

On Thursday, the app experienced some technical difficulties and breifly went offline. When it came back, the instructions for how to use it had chagned slightly. Tipping direclty on someone’s Facebook wall was was out. Now, the only way to activite the bot is through the dedicated tipping Facebook group. Instead of direclty tagging the bot by name in a post, someone sending a tip needs to write “Give [number] Doge to [name].”

The problem, Caballero theorzed, was that the bot’s activitiy came to the attention of the site’s adminstrators. “Someone at…[Facebook] saw that 99% of the activity of ‘DogeTipping Bo'” was based on people tagging it and basically no response from it,” he wrote. “So they went in, saw the name and decided to enforce their ‘only accounts with real people behind’ policy.”

Facebook has a policy that profile should only be set up real live human beings. Unless, of course, you are are Mack Zuckerberg’s dog—in that case, those rules don’t apply. As a result, Caballero was forced to change both name and functionality of the bot. “I see it from the FB perspective and have nothing to blame on them,” he explained. “After all, the app is playing inside their house, and it must obey their rules. I can respect that.”

If all of this complexity makes it seem like the act of something that should be relatively simple—using an Internet platform to transfer a currency that was expicitly designed to be easily transacted over Internet platforms—is in reality kind of a headache, that’s about accurate. This isn’t a knock on the app itself. It manages to do something that hasn’t been done before and, like most of the other aspects of the culture that’s sprouted up surrounding the virtually currency, it’s actually pretty fun and whimsical once you figure out how it all works. It’s just that architecture of Facebook, at least how it currently exists, don’t naturally lend itself to facilitating the transfer of dogecoins.

Caballero, for his part, is optimistic. He reports that more than 2,500 people have authorized the app in its few short weeks of existence and have used it to send over 1.2 million Dogecoin—about $1,300 USD at the current exchange rate. Again, this isn’t a lot of money but, as Palmer said, it’s probably enough to allow at least few people to buy a beer—that is, if they can find a bar that accepts Dogecoin.

?I’m not sure if this will impact the coin, or if it does, at which level,” Caballero explained. ?I see a growing community, and if that community grows more, I think it will positively impact the coin for one single reason: the Facebook community loves to share everything. And since this coin is filled with a lot of love, how couldn’t you love to share something lovable?”