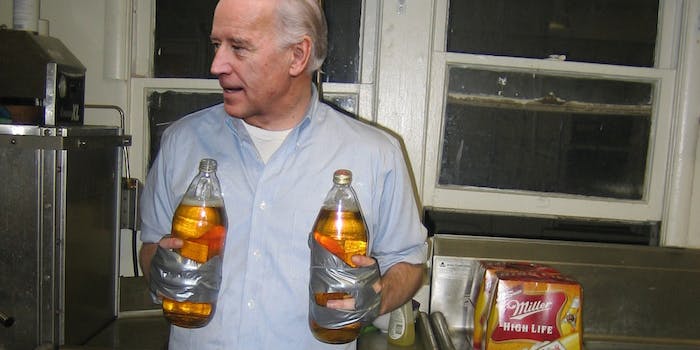 We're not sure what's going on here, but we love it.

Let’s face it: As journalists, we’re suckers for a good Joe Biden vine. But on Friday, the vice president responded to a fitness challenge from First Lady Michelle Obama with a six-second video that singlehandedly justifies Vine’s existence.

First Lady Obama had tweeted a shout-out to Biden earlier Friday, in which she asked him to do five reps—”Gimme Five”—in celebration of the five-year anniversary of her Let’s Move! initiative.

Hey @VP: Ready to join the workout? #GimmeFive of your best reps and pass on the challenge: pic.twitter.com/SDZCJhghyO

Biden accepted her challenge, lifting a weight while talking on the phone and telling viewers, “I do a million of these a day.”

The vine is classic Amtrak Joe, but it raises a few questions that we can’t stop pondering.

Biden seemed fully committed to the bit, and when it comes to the importance of staying in shape, any publicity is good publicity.

But as journalists, we feel obligated to point out one glaring flaw with this vine. After repeatedly scrutinizing the six-second video, we can confirm that Bro Biden here only lifts the weight four times despite claiming to have participated in the “Gimme Five” challenge.

The Obama administration has some explaining to do. #WeightGate is now officially a scandal.