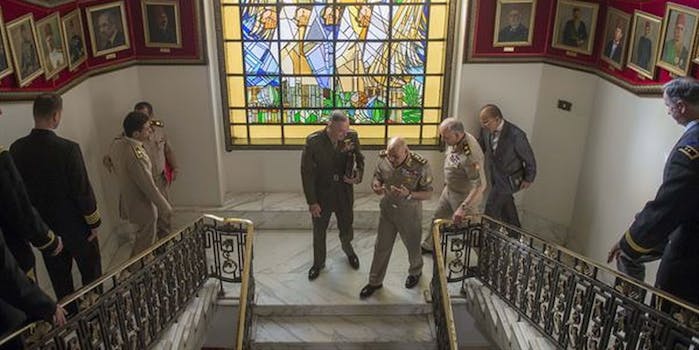 'The character of war has changed.'

“The character of war has changed,” U.S. Marine Corps Gen. Joe Dunford said this weekend, arguing that cyber weapons have made any modern war global in nature.

As such, Dunford said during a flight from Cairo to London on Sunday, the American military must adapt to the changing nature of war—a shift that also means simultaneously fighting on multiple fronts.

Dunford, the chairman of the Joint Chiefs of Staff, argues the U.S. military faces a profound transformation because cyberwar, along with space and ballistic intercontinental missiles, mean wars that once would have been regional ground conflicts are now poised to explode much wider in scope.

America’s top uniformed military officer and military advisor to the president, Dunford cited a hypothetical war on the Korean peninsula as a specific example. A fight there would include more than just U.S. Forces Korea but also U.S. Pacific Command, U.S. Northern Command, U.S. Cyber Command, and U.S. Strategic Command.

Dunford argues that the U.S. military has to adapt to the new character of war by changing the way the Department of Defense works. Specifically, Dunford wants the secretary of defense to delegate responsibility to the Joint Chiefs of Staff in order to do “some things that integrate our forces today in a way that we didn’t need to 10 or 15 years ago.”.

“You have multiple combatant commanders that are all dealing with those challenges,” Dunford said. “There has to be a common operational picture, a common intelligence picture and a framework within which the secretary can make decisions about prioritization and allocation of resources in real time in a crisis.”

The U.S. and North Korea have traded blows in the cyber theater of war in recent years, including the famous hack of Sony Pictures Entertainment in 2014. That was preceded by American cyberattacks against North Korea.

“We’re talking minutes of decision-making space,” Dunford said. “I would argue if we can cut the decision space down from six minutes to four, that’s actually geometric, and the implications are profound. It increases the probability that the American people would be safe.”