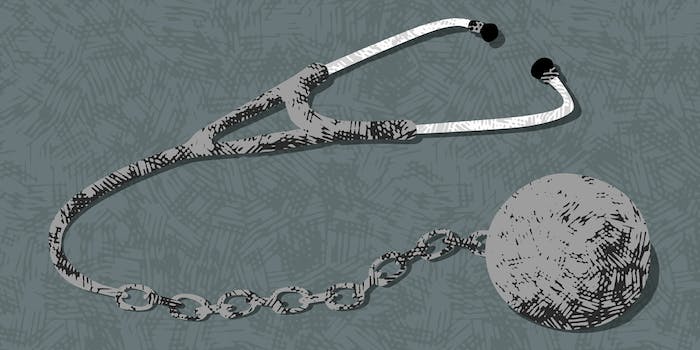 'If healthcare is a human right, then doctors are slaves!' Or so the argument goes.

When Sen. Bernie Sanders (I-Vt.) tweeted his belief that heathcare is a human right last week, it triggered a number of furious responses, the most hyperbolic of which equated universal healthcare to slavery.

So then, Doctors are slaves.

Although many appear to have come across this bizarre and extraordinary analogy for the first time, it has, in fact, been knocking around for years.

We have to at least consider the possibility that the republic is too stupid and pissed off about weird shit to survive. pic.twitter.com/kVoVbbPwYz

Some shitheads think #HealthcareforAll means doctors will be slaves somehow. No, they still get paid and can quit any time they like.

As goes with tracing most phrases to their origin, this story is one of misattribution and cumulative error.

The crude ‘doctors are slaves’ meme used against universal healthcare comparison can be found on online forums and on Twitter as early as 2009.

@singlepayer So MDs have no right to make a living, eh? Basketball players can make millions but doctors are slaves. Nice.

One 2010 article on a still-active conservative blog, ‘Federal Way Conservative,’ claims that “Obama is Slavemaster, Doctors are Slaves.” However, it’s difficult to find any mainstream use of this analogy before 2011, when Sen. Rand Paul (R-Ky.) peddled it at a committee hearing. Prior to that, it appears to have circulated largely among the libertarian community online.

Regardless of where Paul first heard it, his adoption of the argument appears to have helped propel it into the current healthcare debate—although he did not utter the words ‘doctors are slaves’ himself. Instead, Paul alluded to the comparison in a long-winded diatribe at a Senate Health, Education, Labor, and Pensions subcommittee hearing on May 11, 2011:

“With regard to the idea of whether you have a right to healthcare, you have to realize what that implies. It’s not an abstraction. I’m a physician. That means you have a right to come to my house and conscript me. It means you believe in slavery. It means that you’re going to enslave not only me, but the janitor at my hospital, the person who cleans my office, the assistants who work in my office, the nurses.

The hefty constitutional argument, when brought to the media’s attention and abridged for heightened impact, took off across the internet where it appears to have dissolved into meme form.

At the time, celebrities like Michael Sheen and Sarah Silverman retweeted Paul’s quote to millions of followers—albeit in anger.

Even some libertarians came out to slam Paul’s use of the crude analogy.

“Could slaves free themselves by changing professions?”Matt Welch, an editor of libertarian-leaning Reason magazine, wrote. “Do doctors in Switzerland get taken away at gunpoint? To treat the analogy with technical seriousness, even setting aside (as if you could) the colossal weight of America’s most lasting shame, is to render it ridiculous, in my opinion.”

Still, it remains the lingering refrain of some conservatives, who appear to see it as a great and shocking way to communicate their feelings about big government—particularly a government-run healthcare system—and outraged liberals, who simply cannot believe that a thinking person could ever draw a line between a highly-paid vocation and centuries of racist subjugation and oppressive violence.