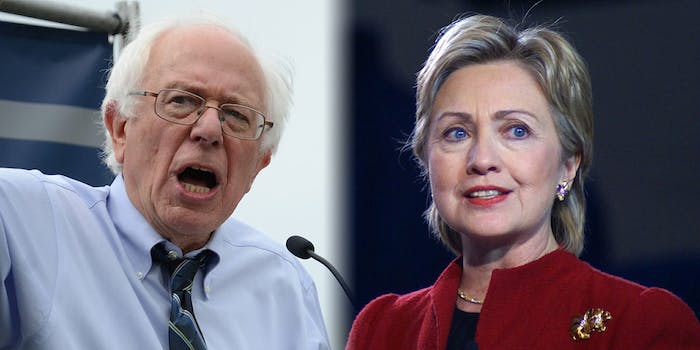 The DNC is accused of violating its own rules by favoring Hillary Clinton over Bernie Sanders.

As the world turned its collective head toward President Donald Trump‘s bevy of scandals, controversy has quietly brewed on the other side of the aisle—but you’d need to look beyond mainstream media outlets to know it.

The Democratic National Committee (DNC) is the subject of a class-action lawsuit alleging that the political organization improperly favored Hillary Clinton’s 2016 presidential election campaign from the beginning, essentially blocking any chance Sen. Bernie Sanders (I-Vt.) may have had at being the party’s standard-bearer against Trump.

The suit has been moving in and out of courtrooms since June 2016, when a complaint was filed in the U.S. District Court for the Southern District of Florida. It lists dozens of donors to Sanders’ campaign—whose contributions ranging close to $3,000 to as low as $25—as plaintiffs. They claim to represent people from 45 states and Washington, D.C.

The suit has so far progressed in relative obscurity. Here’s what you need to know to get caught up.

What does the lawsuit against the DNC allege?

Essentially, the suit argues that the DNC violated its own charter—specifically, Article 5 Section 4—which states the chairperson of the party “shall exercise impartiality and even-handedness” between candidates running for president and their respective campaigns.

“The DNC was biased in favor of one candidate—Hillary Clinton—from the beginning and throughout the process,” the suit alleges.

The suit also accuses the DNC of fraud, negligent misrepresentation, unjust enrichment, breach of fiduciary duty, and negligence. The plaintiffs are seeking repayment of their donations.

It also criticizes the DNC’s handling of donor information in light of the DNC being hacked by Russian cyber criminals in the midst of the campaign.

What stage is the lawsuit at now?

A month after the suit was filed, the DNC and former Chairwoman Debbie Wasserman-Schultz, who was also named a defendant, filed a motion to have the suit dismissed because they claimed they were not served the lawsuit correctly. A judge ruled it could continue after the lawsuit was re-served.

In September 2016, the DNC and Wasserman-Schultz again filed to dismiss the lawsuit, citing “vague claims of unspecified injury” by the defendants and claiming the suit is being used as a “political weapon.”

“Plaintiffs seek extraordinary and unprecedented relief: a court order binding a political party to an internal rule of operation adopted within the party’s discretion and related to its selection of its presidential nominee, and a multi-million dollar judgment, based on Plaintiffs’ contention that a political party did not abide by its own rule,” the DNC wrote in its motion.

The DNC said it believed that the defendants lacked standing to bring about the lawsuit.

Judge William J. Zloch ordered that oral arguments on the DNC’s motion to dismiss be held on April 25 in Fort Lauderdale, Fla.

During the hearing, the DNC’s lawyer, Bruce V. Spiva, argued that the DNC’s bylaw about neutrality is a “discretionary rule that it didn’t need to adopt to begin with.”

Spiva also argued against the validity of the defendants’ using a class-action lawsuit in this matter, as it would be nearly impossible to determine, depose, and possibly have all Democratic donors testify at the trial.

From the court transcript of Spiva’s argument:

“The Court would have to find that these individuals were induced to give money to Representative Sanders, sorry, Senator Sanders, on the basis that there would be this neutrality that there purportedly was not, and that they wouldn’t have–they relied on that, and that they wouldn’t have given that money otherwise. And same with DNC members. The Court would have to define who is a member of the Democratic Party nationwide. There is no national registration for either of the major parties. And so, this Court would have to determine what it means to be a Democrat and then determine whether the class that the Court defined was injured in some way by the allegations.”

The defendant’s attorney, Jared H. Beck, argued that the two sides were “talking primarily about the loss of money.”

“What we are alleging and specifically alleging in this complaint is that people paid money in reliance on the understanding that the primary elections for the Democratic nominee—nominating process in 2016 were fair and impartial,” Beck said. “And that’s not just a bedrock assumption that we would assume just by virtue of the fact that we live in a democracy, and we assume that our elections are run in a fair and impartial manner. But that’s what the Democratic National Committee’s own charter says. It says it in black and white. And they can’t deny that.”

At the end of the hearing, Zloch said the case was “very interesting,” adding that an order with his decision as to whether or not the case could proceed would “take some time.”

The court must now decide whether the lawsuit can move forward or if it will be dismissed, as the DNC has requested. In the meantime, you can check out the original complaint here. And you can read a transcript of the April 25 hearing here.