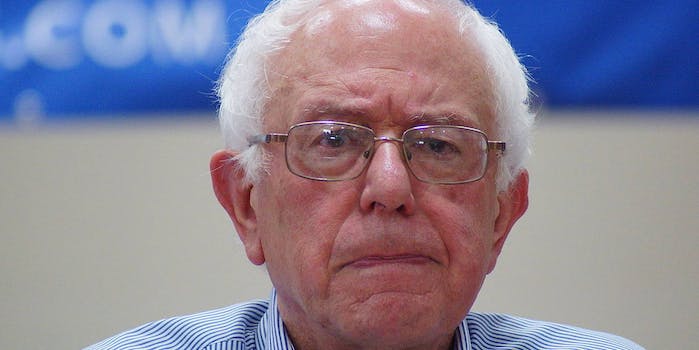 'That’s what Donald Trump wants. But that’s not what will expand the progressive movement in this country'

On Monday, four days after Wikileaks released a searchable database of nearly 20,000 Democratic National Committee emails stolen by a hacker, the party is attempting to mount damage control.

The emails—which show how party officials worked against Sen. Bernie Sanders, who decided to run as a Democrat last year after spending his long political career as an independent or in a third party—have enraged many Sanders supporters.

In response, DNC officials released a statement apologizing to Sanders and attempting to unify the party during this week’s Democratic National Convention in Philadelphia.

NEW: DNC apologizes to Sanders and his supporters for the content of the hacked emails. pic.twitter.com/Sfw6k1I8yy

The statement was signed by Interim DNC Chair Donna Brazile, a veteran Democratic campaign operative who ran Al Gore’s 2000 presidential campaign andwho  has stepped in to lead the party after former Chair Rep. Debbie Wasserman-Schultz announced she was stepping down last weekend. It was also signed by other DNC officials like Baltimore Mayor Stephanie Rawlings-Blake and Association of State Democratic Chairs President Raymond Buckley.

However, if today’s events at the DNC are any indication, it may be too little too late.

Sanders supporters drowned out the convention’s opening prayer with chants of their preferred candidate’s name.

During a Sunday evening interview with Clinton spokesperson Brian Fallon on MSNBC, angry Sanders supporters chanted “lock her up,” which was a common refrain during the Republican National Convention last week—but something that was certainly unexpected to pop up among liberals in Philadelphia.

When Sanders himself called on supporters to elect Clinton and her VP pick Tim Kaine, he was met with a chorus of boos.

.@BernieSanders booed telling supporters to help elect Clinton: "This is the real world that we live in." https://t.co/8jV2wUWtiK

Any mention of Clinton from a convention speaker has been met with loud rancor from Sanders supporters on the floor.

Many more boos here for any mention of Clinton than for Trump #dnc pic.twitter.com/XHLAqYpaiU

The boos and chanting are overpowering the speaker's audio at the #dnc. #DNCinPHL pic.twitter.com/Onk8Qx4aYq

In an effort to quell the chaos, Sanders sent an email urging all of his delegates to behave. “I am asking all of us to bear that in mind while we are on the floor of the convention,” he wrote. “Our credibility as a movement will be damaged by booing, turning of backs, walking out or other similar displays. That’s what the corporate media wants. That’s what Donald Trump wants. But that’s not what will expand the progressive movement in this country.

“I know everyone is frustrated, especially by the recent DNC email disclosures. But, as a result of this disclosure Debbie Wasserman Schultz was forced to resign. This is a very positive sign,” Sanders continued. “I would ask you as a personal courtesy to me to not engage in any kind of protest or demonstration on the convention floor.”