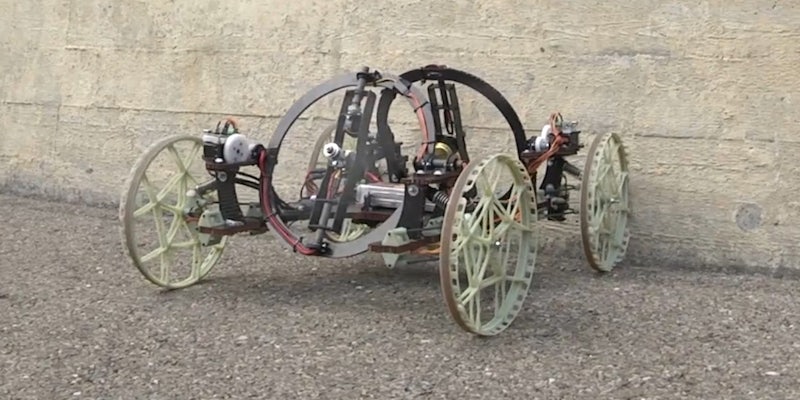 It looks like it could be a character from a Disney film.

It’s not a character in a new animated film, but VertiGo, a robot created by Disney, would fit right into those imaginary on-screen worlds.

VertiGo can move gracefully from the ground to the wall and climb along walls vertically like a lizard, even on uneven surfaces.

The 4.5-pound VertiGo robot, developed by Disney Research Zürich in collaboration with a student project at the Zürich science and technology university ETH, is controlled by a human driver and powered by two propellers that provide a thrust onto the wall.

As Dr. Paul Beardsley of Disney Research explained, VertiGo has two propellers that are angled to push the robot against the wall and provide upward motion that counters gravity, similar to a quadcopter drone with four propellers that thrust upward.

The 22-inch robot consists of a central carbon-fiber baseplate, carbon rods that connect 3D-printed parts, and servomotors that control the thrusters individually. In the video above, the robot climbs from the ground to a wall, but researchers said that it could theoretically climb on the ceiling, too.

Beardsley, who helps develop these innovative new technologies at Disney, said that how the robot will be used is up to other people within the massive company.

“We are working generally in the area of mobile robots because of the possibilities for next generation entertainment,” Beardsley said in an email to the Daily Dot. “The interest in wall-climbing robots is because they have good visibility as a display.”

Disney has no plans to open-source VertiGo, and its possible uses for the robot remain unclear. But based on the little bot’s versatility, it would make an optimal companion for Wall-E.