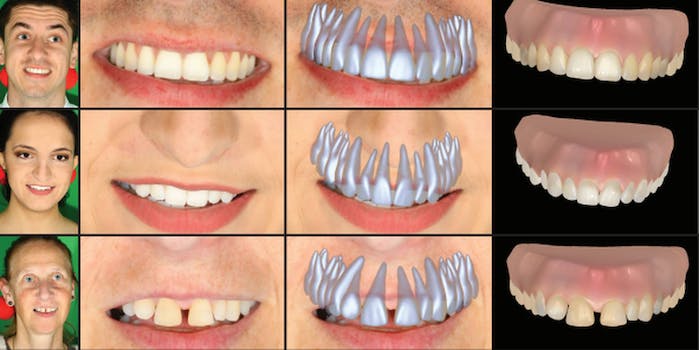 You can now digitally reconstruct your teeth from a picture

When it comes to making digital recreations of humans, technology can do incredible things. That is, unless you’re talking about teeth.

Without a full scan of the inside of a person’s mouth, there hasn’t been a way to accurately recreate teeth—until now. Disney Research and ETH Zurich have developed a groundbreaking, non-invasive technique that digitally recreates a person’s teeth using just a sparse set of photographs.

Using a model-based reconstruction method, Disney’s technology looks at the image of the individual’s mouth, and then accurately matches and recreates where their teeth plausibly should go. Most remarkably this process works not just with multi-camera reconstruction setups, but also with lower-quality sources like uncalibrated photographs and even short cell phone videos.

Subjects don’t need to bare their teeth to be scanned. The algorithm starts with a template and then makes changes based on what it sees in your mouth.

Coming from a media company like Disney, the immediate likely applications for this technology are for things like movies, cartoons, and video games. However, there are important medical applications for something like this as well, including helping dentists create easy 3D models of their patient’s mouths or creating personalized dentures. You never know what you’ll do with a 3D-mapping dental super program until you have it.

You can see the reconstruction for yourself in this video from Disney, or read their paper on the process at their research site.