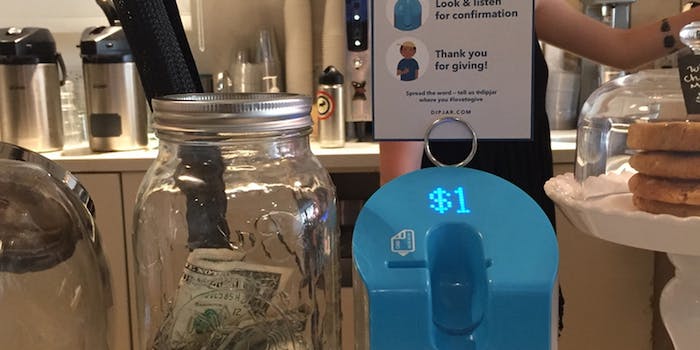 Despite all the attention to the minimum wage, there might be an even easier way to improve low-wage workers’ lives. One innovative startup is using technology to rethink the way we supplement those workers’ take-home pay.

DipJar founder and CEO Ryder Kessler thinks the conversation around pay for low-wage workers often leaves out an important piece of the puzzle.

“There’s been an invisible pay cut for millions of low-wage service workers that we aren’t even aware of,” Kessler told the Daily Dot. “Cash tips have evaporated and are a huge supplement to low-wage workers’ pay.”

DipJar is an attempt to reverse that loss. It’s a digital tip jar that makes it easy for customers paying via credit card to give workers a tip at a fixed dollar amount by dipping their card into a friendly blue jar.

Because it transmits data over a 3G wireless network, DipJar can also provide employers with useful data, such as which employees are getting the most tips and at what times of the day.

The jar even lights up and plays a friendly sound effect after each use, alerting servers that they’ve been tipped and eliminating the danger of what Kessler called the “Costanza effect.”

Consumers may feel an urge to be generous, but they’re likely to withhold a tip if they have a feeling that their generosity will go unnoticed. And that risk is rampant with tablet tipping.

“Tipping is meant to be an opt in experience, but tipping with a tablet is hostage tipping,” Kessler said. “You [go to a screen automatically where you] are forced to say no.” Over the course of an average work day, turned-screen tipping, where the result goes unnoticed except to workers, often leads to low tips and low employee morale.

“DipJar was inspired by a conversation I had with a barista,” said Kessler. “It was very busy and I said, ‘You must at least get more tips when it’s busy.’ She said, ‘No that used to be true. I used to get 4 to 5 dollars an hour in cash tips, but now I’d rather it be empty.’”

Boosts in tipping, on the other hand, can yield exactly the opposite results. “There’s something powerful and social about showing appreciation,” said Kessler. DipJar marries the ease of technology with the personalized feel of a traditional tip jar. It’s a tool both for customers to show appreciation for hard-working servers and for small-business owners to make a small investment toward long-term gains.

“Dos Toros has this slogan ‘Our team is our secret ingredient’ and they have DipJars in all their locations,” Kessler said. “I hope that other merchants will take that attitude to heart.”

Kessler is also expanding the possible uses of DipJar. When his brother, a Wharton economics professor studying generosity, learned about the device, he quickly pointed out that it could do great things for charitable collections. DipJar has since partnered with the Children’s Miracle Network and other charities and created customized jars that honor the iconic image of a collections jar.

“I believe people are generous and people want to be generous,” said Kessler.

If our fondness for technology isn’t going anywhere, perhaps a cute flashing device can nudge customers toward a more generous future.