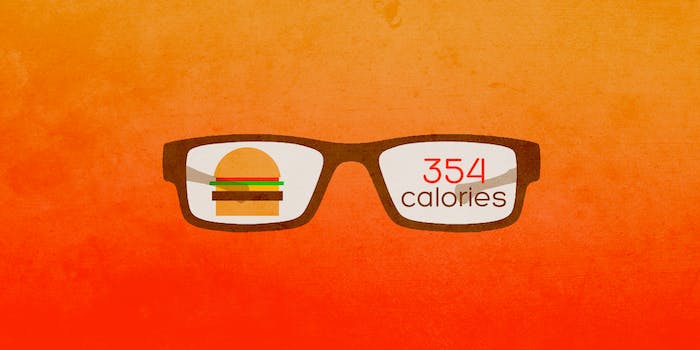 Tracking your diet? Don't forget to put on your eyeglasses.

Fitness tracking apps are a popular way to stay healthy, and often the easiest method for keeping track of the food you eat. Still, doing so requires the arduous task of manually inputting every meal and all those in-between-meal snacks you snuck in on the side. Sometimes you forget to input a meal, or a days worth of meals, which usually results in a slippery slope down to the conclusion that “this just isn’t worth it anymore.” You can now forget about all of that manual labor thanks to a pair of health conscious glasses. “Diet Eyeglasses” were revealed this month at the IEEE Body Sensor Networks conference, and are the brainchild of Oliver Amft, a professor at the University of Passau in Germany. They were created using a 3D printer, and have flexible fabric electrodes woven into the otherwise ordinary frames. Those electrodes stay in contact with skin right behind the ears and use electromyography to detect contractions in facial muscles in order to differentiate foods by the way in which they are chewed.

Eight researchers went about eating a bunch of different foods while wearing the glasses to see if this was more than an idea fit for a sci-fi film. Not only did the glasses determine that the user was chewing, but they were also able to determine what foods were being chewed. To keep things simple, the foods used in the test all had distinct textures: bananas, cookies, toast, carrots, and Jelly Babies.

The system does have its limitations. Researchers say it would most likely not be able to tell the difference between two foods with similar textures. And it would be really surprising if it could determine that you drenched your already not-so-healthy pizza with some buttermilk ranch. Still, researchers say the glasses could be used alongside other sensors to create “personalized monitoring systems,” which means you no longer have to stop in the middle of dinner to track what you are eating, as long as you make sure to put your glasses on before you start chewing.