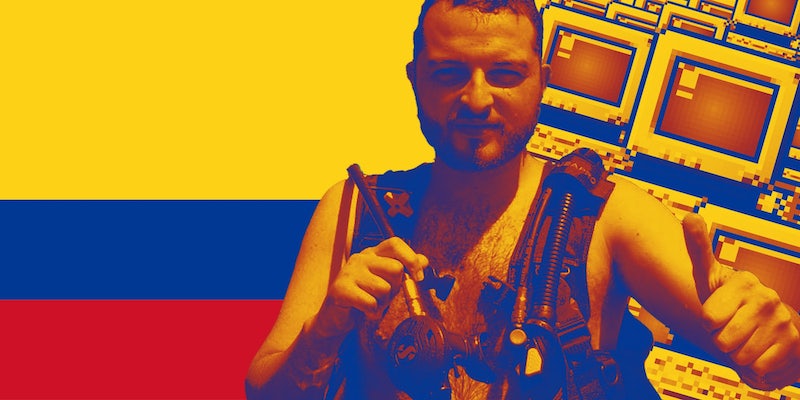 Aaron Swartz all over again?

In a story that is troublingly reminiscent of the case of Aaron Swartz, a Colombian graduate student is facing nearly a decade behind bars for sharing academic papers online.

Twenty-six-year-old Diego Gomez has been studying a Masters degree in Conservation and Wildlife Management in Costa Rica, and worked “in research and preversation projects on endangered Colombian amphibians.” In the course of his research, he came across a relevant research paper, which he shared on academic resource website Scribd—and has subsequently been sued by the paper’s author for “violation of economic and related rights,” and is now facing between four and eight years in prison.

To provide some context: Colombia, like much of the developing world, has significant barriers in place impeding academic research. “Libraries are often inadequate,” the EFF reports. “And schools and universities are often unable to pay dues for expensive, specialised databases.”

Writing on his blog, Gomez describes how, working remotely far from the big cites, “studying science from the province represents a higher level of difficulty… [libraries] do not have the resources to pay the thousands of dollars for accessing specialised books or the world’s major bibliographic databases; this circumstance limits the right to access to knowledge for students, researchers and professors who are in these regions.”

Determined to overcome these obstacles, Gomez details his efforts to help himself and his fellow students. “With the spreading of the Internet, sharing knowledge through the web quickly became a daily practice among academic circles. As usual among my colleagues,” he goes on, ” I shared with them documents and information considered relevant for our scientific interests.”

Gomez says he shared the documents in good faith, “in gratitude for all the support I had received from other researchers in Colombia and other countries,” and made no profit off them, nor attempted to pass them off as his own.

Gomez goes on to detail the incident in question that has led to legal action being taken against him:

Three years ago, through a Facebook group in which I participated along with many others interested in the amphibian and reptile studies, I came across a master’s thesis that was crucial to identify some amphibians I found… At that time, however, I thought it was something could be of interested [sic] for other groups, so I shared it on the web.

Although I was not the only one (the document was in several sites already), for sharing knowledge—recognising the authorship—now the author advances a criminal case against me.”

The EFF reports that copyright law in Colombia “does not have [a] flexible fair use system like in the United States,” and the list of exemptions to the law predates the digital age and so cannot apply to Gomez’ case.

The masters student is being supported by the Colombian digital rights group Fundacíon Karisma, which has put out a statement saying “it should be clear that the actions of users, non-profit activities, and sharing, are not crimes… In a society that has a disruptive technology like the Internet, the exercise of the rights to education, access to science and culture, and respect for freedom of expression must be respected.”

Gomez may yet prevail: the Colombian high court ruled in 2008 that copyright infringement cannot be criminal if there was no intent to profit off of the infringement.

For now, Gomez intends to fight the charges, angrily writing that he’s “disconcerted that this activity I did for academic purposes may be considered a crime, turning me into a ‘criminal.’ Today what the vast majority of the country’s researchers and conservationists are doing, despite being committed to spreading knowledge, is turning us into criminals.”

He finishes: “Sharing is not a crime.”

Correction: A previous version of this article misstated Fundacíon Karisma’s relation to Diego Gomez. The digital rights group is supporting Gomez and issued a statement to that effect. We regret the error.