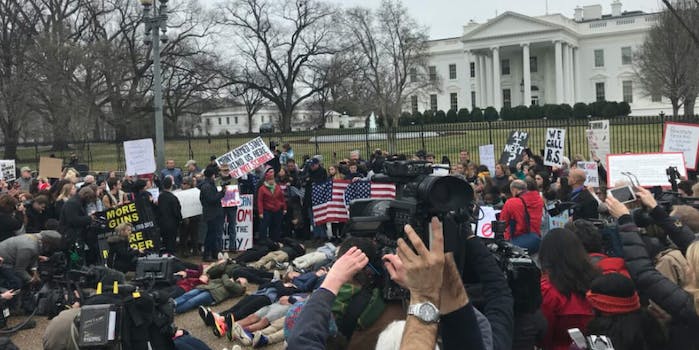 Students stage ‘die in’ protest in front of White House

Students laid on the ground in protest of school shootings.

Students gathered outside of the White House on Monday as part of a “die in” to protest in favor of gun laws in light of the deadly school shooting in Parkland, Florida.

The protest was organized by Teens for Gun Reform. Students laid down on the ground to symbolize victims of school shootings, according to the organization’s event page on Facebook.

Students now staging a "die in" in front of White House. Each one quietly walked up, lay down on ground, now lying still. pic.twitter.com/CpVMBRC1SX

“By doing this, we will make a statement on the atrocities which have been committed due to the lack of gun control, and send a powerful message to our government that they must take action now,” the Facebook page said of the die in protest.

Videos from the protest show students lying down on the ground in rows, hands clasped over their stomach surrounded by fellow protesters with signs. The signs read “Shame on you” and “Disarm hate” according to HuffPost. Other signs read “Am I Next?” “We Call B.S.” and “More Guns More Murder.”

WATCH: Teens hold "lie-in" protest for gun reform outside of the White House in the wake of Florida school shooting pic.twitter.com/npUwDwn5VD

Die-in at the White House to honor those killed in Parkland. #MarchForOurLives #ThrowThemOut https://t.co/s9TaR8CUut

Survivors from the school have also come out and publicly called on Congress to pass gun reform laws.

Alex Wind, 17, said several students from Stoneman Douglas have vowed not to go back to school until “changes have been made.”

A “March For Our Lives” protest in Washington D.C. is also being planned for March 24. People will “take to the streets of Washington D.C. to demand that their lives and safety become a priority and that we end this epidemic of mass school shootings.”