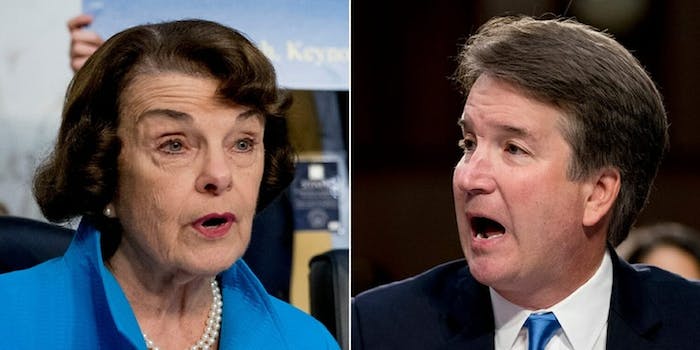 'I just think this all sounds like desperation to me.'

Update 11:26am CT, Sept. 14: The letter Feinstein sent to the Justice Department was regarding an assault accusation against Brett Kavanaugh when he was in high school, according to the New Yorker.

In the letter, the woman alleged that, during an encounter at a party, Kavanaugh held her down, and that he attempted to force himself on her. She claimed in the letter that Kavanaugh and a classmate of his, both of whom had been drinking, turned up music that was playing in the room to conceal the sound of her protests, and that Kavanaugh covered her mouth with his hand.

In response, Republicans on the Judiciary Committee have released a letter signed by 65 women who knew Kavanaugh in high school, who considered him an “honorable” person.

“I have received information from an individual concerning the nomination of Brett Kavanaugh to the Supreme Court,” Feinstein had said in a strangely vague statement released Thursday.

“That individual strongly requested confidentiality, declined to come forward, or press the matter further, and I have honored that decision,” she continued. “I have, however, referred the matter to federal investigative authorities.”

The statement emerged just one day after an article published by The Intercept claimed that Feinstein was in possession of a letter about Kavanaugh, acquired from from Rep. Anna Eshoo (D-Calif.), who refused to comment. The Intercept reported that the letter was from a woman being represented by attorney Debra Katz, who “works with #MeToo survivors.”

The New York Times then quoted two officials who said that the letter detailed possible sexual misconduct allegations against Kavanaugh by a woman that occurred while they were in high school.

For many conservatives, the news was interpreted as a fabricated and desperate smear by liberals to derail the confirmation.

Breaking wind from CNN! Sen. Feinstein will appear w/ Judge Kavanaugh to release a letter from someone who just remembered something from when he was in high school. She offered to have her Chinese driver bring him to the event. #desperate

If there's nothing here, this is legitimately evil. https://t.co/91zKZxr4jW

I have received information concerning Dianne Feinstein. I will not inform you of the nature of this information, the source of the information, or pretty much anything about it. Suffice it to say she eats small children.

A reporter for the Daily Wire, Ryan Saavedra, then forwarded his debunk of the allegations by pointing out that Kavanaugh attended an all-boys school.

NYT reports Feinstein's letter on Kavanaugh is about possible sexual misconduct between Judge Kavanaugh and a woman when they were both in high school.

It is not confirmed at this stage, however, that the letter details allegations of sexual misconduct by Kavanaugh. Republican officials used the mysterious nature of the letter to dismiss it.

Both the White House and Senate Republicans quickly criticized the move as an “11th-hour” attack by Democrats to block Kavanaugh, who appeared set for confirmation by the Republican-controlled Senate in a vote scheduled for Sept. 20.

A spokesperson for Republican Senate Judiciary Chairman Chuck Grassley told Bloomberg that there was “no plan to change the committee’s consideration of Judge Kavanaugh’s nomination” on the basis of “the letter in question.”

“It’s a statement about a letter that nobody’s seen about a person that nobody’s named about a subject that is secret,” said Sen. John Cornyn (R-Texas), who also sits on the committee. “I just think this all sounds like desperation to me.”