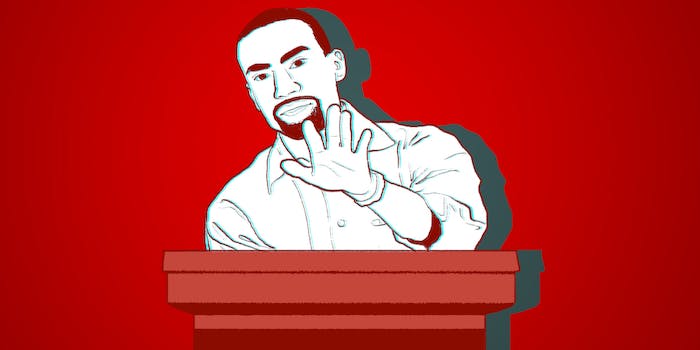 'I have come to realize that the traditional pathway to politics...will not lead us to the transformational change our city needs.'

Deray Mckesson, a prominent and controversial civil rights activist who achieved national notoriety in association with the Black Lives Matter movement, is running for mayor of Baltimore.

“I have come to realize that the traditional pathway to politics, and the traditional politicians who follow these well-worn paths, will not lead us to the transformational change our city needs,” McKesson wrote in a Medium post published on Wednesday. “Many have accepted that our current political reality is fixed and irreversible—that we must resign ourselves to accept the way that City Hall functions, or the role of money and connections in dictating who runs and wins elections.”

“In order to achieve the promise of our city and become the Baltimore we know we can become, we must challenge the practices that have not and will not lead to transformation. We must demand more from our leaders and local government.,” he continued. “I am running to be the 50th Mayor of Baltimore in order to usher our city into an era where the government is accountable to its people and is aggressively innovative in how it identifies and solves its problems.”

McKesson, who was born in Baltimore and previously worked as a public school administrator in Minnesota, attained a national profile from his social media presence on the ground during the protests in Ferguson, Missouri following the shooting death of a black teenager by a white police officer.

Mckesson told the Baltimore Sun that he will be releasing his campaign platform in the coming days. His activism likely provides a good indication of his focus. Last fall, Mckesson co-founded Campaign Zero, an organization centered around decreasing what many activists see as unwarranted use of force by police through policies like the abolition of “broken windows policing,” police demilitarization, and the mandatory use of police body cameras.

Filing paperwork shortly before the cutoff, McKesson became the thirteenth candidate to announce his intention to replace current Baltimore Mayor Stephanie Rawlings-Blake, who is not running for reelection. The Democratic primary, which effectively serves as the general election in an overwhelmingly Democratic city like Baltimore, will be held on April 26, meaning Mckesson has under three months to mount a campaign.

The issue of police brutality is especially potent in Baltimore following the controversy surrounding Freddie Gray, an African-American man killed during a “rough ride” in the back of a Baltimore Police Department van. Gray’s death sparked a national outcry and destructive riots throughout the city.

Six police officers were charged with homicide for the incident by Baltimore State’s Attorney Marilyn Mosby, whose husband is one of Mckesson’s rivals in the race for mayor.

In the Medium post announcing his candidacy, Mckesson linked to a page on the crowdfunding platform Crowdpac where people can donate to his campaign. About 12 hours after the Medium post went up, Mckesson had already raised over $31,000.

While Mckesson’s candidacy is sure to draw that positive interest from those around the country supportive of his activism, it’s also sure to attract antipathy.

After a white supremacist fatally shot nine people at a historic African American church in Charleston, South Carolina, Mckesson made appearances at number of protests in the city. Mckesson’s presence at the rallies sparked the Twitter hashtag #GoHomeDeray, through which users charged Mckesson’s primary goal was to foment racial conflict and that is presence in the city would only create discord. The #GoHomeDeray hashtag trended nationally.

“It’s never happened before, someone coming in this late in a race that’s this developed,” Patrick Gonzales, a pollster who has been tracking public opinion in Baltimore’s mayoral race told the Washington Post. “I can’t imagine that person being successful…[but I] wouldn’t completely foreclose [the possibility].”