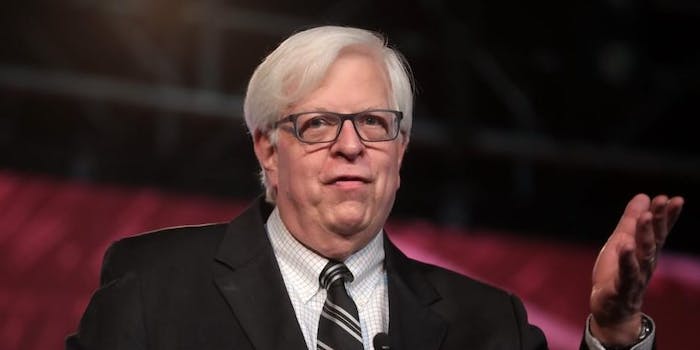 Dennis Prager on Anne Frank: ‘I don’t get my wisdom from teenagers’

Yes, he really said that.

Although she died in a Nazi concentration camp at the tender age of 15, Holocaust victim Anne Frank left behind a lasting legacy in the form of her personal journal.

Beginning in 1942 on her 13th birthday and extending through the two years her family spent in hiding until they were discovered, The Diary of Anne Frank provides an unflinching glimpse of life as a teenage Jew during the Nazi’s occupation of the Netherlands. She is a beloved symbol of the era, praised for her tenacity, optimism, and wisdom beyond her years.

Unless you’re Dennis Prager, that is.

On a Dec. 23 episode of Prager’s Fireside Chats, the founder of right-wing propaganda machine PragerU responded to fan mail asking what he thought of the famed Frank quote, “In spite of everything, I still believe that people are really good at heart.”

He took the opportunity to dunk on her teen status.

“It doesn’t matter that she wrote it. I don’t get my wisdom from teenagers,” he says.

“That she was a wonderful young woman and wrote an unbelievably powerful document that will last forever is beside the point,” Prager continues. “I don’t expect 16-year-olds [sic], unless they grew up in a religious Jewish or Christian home [sic]. She was a secular Jew.”

“Most kids believe that, but it is not true. So it has ever been an issue for me.”

Finally, he concludes, “Well, [I] disagree with Anne Frank. So what?”

A video clip of his comments started circulating Monday on Twitter when Media Matters’ Jason Campbell posted it. Most reacted to Prager’s statements with open-mouthed horror and revulsion, which is a pretty predictable response to someone saying that most people aren’t good at heart and Frank wasn’t wise.

“Guess he’s never heard of someone having wisdom beyond their years,” Twitter user @royeverett16 wrote. “It would be very difficult to come up with a worse answer to this question. Mind boggling.”

Guess he's never heard of someone having wisdom beyond their years. It would be very difficult to come up with a worse answer to this question. Mind boggling.

Campbell’s colleague Eric Kleefeld wrote that while “you’re not required to agree with *everything* some exalted historical figures” have said, Parger’s comments are “just truly awful.”

I mean, you’re not required to agree with *everything* some exalted historical figure has said. You are free to arrive at different conclusions after thinking for yourself.

But this — it’s just truly awful.

Others opined that Prager isn’t exactly a paradigm of enlightenment.

“I’m not getting my wisdom from a 60 years old who is paid by the fracking industry to spread propaganda on YouTube,” Twitter user @narcIsGoldmund wrote.

I'm not getting my wisdom from a 60 years old who is paid by the fracking industry to spread propaganda on YouTube.

All of Dennis prager’s videos are full of shit.

Prager has some strange views pic.twitter.com/x9ZDdgvgCT

You don’t need to be forgiven for that

Some may find it counterintuitive that the man behind PragerU, which lionizes millennial conservatives and has an extremely tight relationship with the right-wing college student indoctrination factory Turning Point USA, would drag someone’s wisdom merely because of their age.

But then again, the Franks were liberal Jews and Anne dreamed of becoming a writer or journalist, reports the Anne Frank House. So perhaps Prager’s disagreement with her is less ageist and based more on politics and his dislike of the media.

Either way, Prager arguably should’ve known better. After all, in 2017, he wrote, “[N]o Jewish title is as sacrosanct as one with the name Anne Frank on it.”