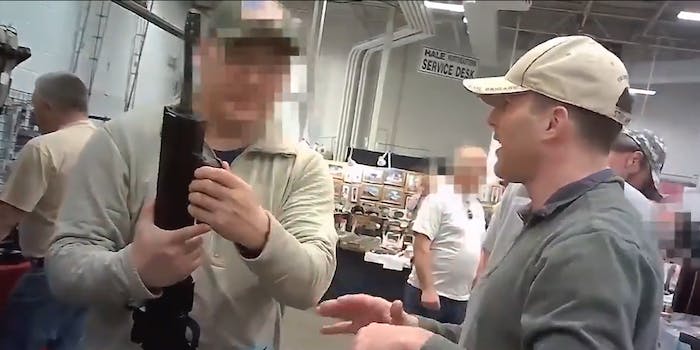 Rep. Comstock has received $137,232 in total donations from the National Rifle Association.

Last week, I went to a gun show to find out how easy it is to buy an assault rifle. What I found was terrifying – it took less time to buy a weapon of war than a cup of coffee. #VA10 #NeverAgain #VetsVsTheNRA pic.twitter.com/d6bYxe6ADj

The short video shows Helmer, an Iraq and Afghanistan veteran, purchasing a rifle at a gun show without a background check. The campaign clip explains that this particular purchase was made “less than two miles away from a public school.” Helmer lamented that “it took less time to buy a weapon of war than a cup of coffee.”

“This is the same gun, same magazine I had in Afghanistan,” Helmer can be heard saying to the salesperson before asking whether a background check will be required.

Helmer asks a second time whether a background check is required.

“Are you a Felon?” the seller asks.

“No,” Helmer responds. Both men laugh, as he is apparently taken on his word.

The video had around 118,000 views as of Tuesday and sparked a conversation on gun control by Twitter users.

In a comment to the Hill, Helmer described a loophole in federal law that allows gun sales at trade shows to happen without formal background checks as “insane.”

“There is a huge loophole in the law that makes it legal to buy such weapons from private dealers without doing a background check. This is insane, and it is dangerous. This weapon is similar to the weapons I carried in Iraq and Afghanistan, and there’s no reason it should be this easy to get one,” he said.

The Democrat said that he wishes to see a complete ban on high-powered assault weapons, bump stocks and high-capacity magazine. Likewise, he is seeking to a requirement for background checks to be performed on any customers at gun shows.

Helmer is, of course, seeking to win Virginia’s 10th District and this video is a clear challenge to his Republican rival Comstock, who was first elected in 2014. Comstock was reelected in 2016, with 52 percent of the vote, but the district voted in favor of Democratic candidate Hillary Clinton in the presidential election.

The Democratic Congressional Campaign Committee announced in 2017 that Comstock’s district was one of their top targets in for the 2018 midterm elections.

Given Comstock has received $137,232 in donations from the National Rifle Association throughout her political career.