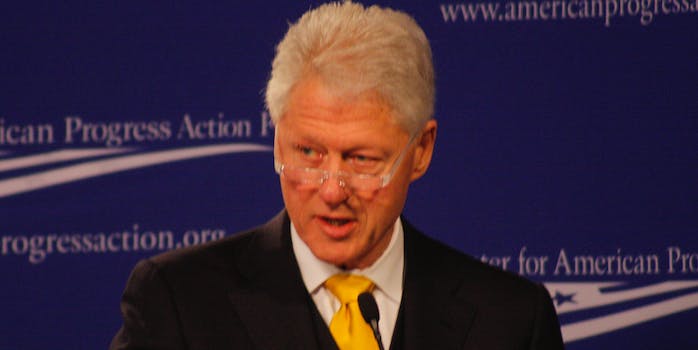 Bill Clinton deemed ‘too toxic’ for Democrats in 2018

President Bill Clinton may soon be invisible in the Democratic party.

As the 2018 mid-term elections approach, the Democrats are coalescing around a message strategy, and it’s one that is leaving out one of the party’s largest figures: President Bill Clinton.

A new report by Politico centers around how Democrats seeking to run on the moral high ground against the party of Donald Trump don’t want to be associated with a president who has his own history of sexual assault allegations.

Privately, many Democratic politicians and strategists are harsher and firmer: Don’t come to their states, and don’t say anything about their campaigns. They are still worried about saying it out loud, but they don’t want him now, or maybe ever. They know Republicans would react by calling them—with good reason—hypocrites.

In 2016, when President Trump was attacked for his history of treating women—especially in the wake of the Access Hollywood tape where he was caught bragging about sexual assualt—the president used Bill Clinton’s past behavior as a cudgel against his opponent, Hillary Clinton.

Trump called Bill and Hillary Clinton the real abusers of women, and infamously brought women who accused the former president of sexual assault to one of the presidential debates, holding a press conference before it where they attacked Hillary for protecting and enabling her husband.

With the growing prominence of the #MeToo movement, it’s a situation that Democrats are not eager to repeat, despite the party looking to make gains in the rural and southern communities that Bill Clinton was able to appeal to.

“I think it’s pretty tough,” Rep. Pramila Jayapal (D-Wash.) said to Politico. He “brings up a lot of issues that will be very tough for Democrats. And I think we all have to be clear about what the #MeToo movement was.”

Democrats have tried to stay ahead of the movement, knowing Republicans will pounce on any misstep and shout hypocrisy despite not being beholden to it. After the Harvey Weinstein reports came out, Democrats who took campaign cash from Weinstein donated and returned the money. But Republicans, this past month, refused to return campaign money from casino magnate Steve Wynn after reports of his harassment came out.

That said, some Democrats have put out feelers to Clinton, who made over 100 appearances for Democrats in the 2010 midterms.

Several Democratic campaigns have already polled Clinton’s popularity in their races, weighing whether to take the risk of inviting him out. Others say they’d love to see him chip in, so long as he sticks to New York, at closed-door fundraisers for them where no photographs of them together are taken.

It’s become a no-win situation for the party. With this report saying they didn’t want Clinton campaigning, conservatives leapt at the news, saying Democrats were trying to ignore or dismiss their past.

What's weird about this is how for 20 years Dems told us Bill Clinton's sex life was no one's business except his and his family's. https://t.co/sLvvoJj9vc via @politico

Let's make like he was never here. From Politico: 'Dems: Bill Clinton too toxic to campaign in midterms; One of the party's top surrogates has been effectively sidelined by the #metoo movement.' https://t.co/Ul6pAZB5uz pic.twitter.com/AbLTyA5qFr

Just this month, the Clinton’s were party to another sexual harassment story, when it was revealed Hillary Clinton did not fire a staffer accused of harassing another campaign employee in 2008