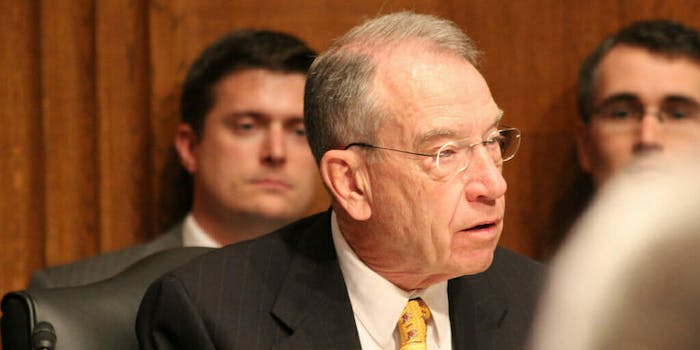 Fusion GPS are behind the now notorious Steele dossier.

Two Democratic senators sitting on the Senate Judiciary Committee are calling on its chairman to release transcripts of an August interview with Glenn Simpson, co-founder of Fusion GPS, the research company that made the controversial dossier on President Donald Trump.

The demand comes one week after Grassley and Sen. Lindsey Graham (R-S.C.) asked the Justice Department to open a criminal investigation into the dossier’s author, a former British intelligence officer named Christopher Steele. At the time, according to the Hill, the research firm’s lawyer slammed the move as “attempt to discredit government sources.”

Simpson and a cofounding executive Peter Simpson Fritsch wrote a New York Times op-ed earlier in the month about the matter. In that piece, the pair criticized the Republican Party lawmakers for leaking choice parts of their testimony and asked for the full interview transcript to be released.

The Democrat lawmakers echoed this position, branding the call for a criminal investigation as a crass “miscalculation” on the part of the GOP committee members.

“Diverting our focus from Russian interference to Glenn Simpson or Christopher Steele is, in our view, a misallocation of scarce resources,” they said. “To the extent that you believe continued attention to those individuals is warranted, the American people should be allowed to decide for themselves.”

“There is simply no reason to keep the Simpson testimony (or other testimony before our committee for that matter) hidden while this distraction goes on.”

When published by BuzzFeed News in January 2016, the 35-page intelligence dossier made several explosive but uncorroborated allegations that the Russian government held compromising information, or ‘kompromat’ material, on then-Republican presidential candidate Trump.

This included some potentially embarrassing claims, in particular, an encounter that allegedly took place in the Ritz Carlton Hotel in Moscow involving Trump, urine, and prostitutes. Intelligence like this, it was alleged, would be used to strong arm and blackmail Trump if he were to succeed in his presidential bid.