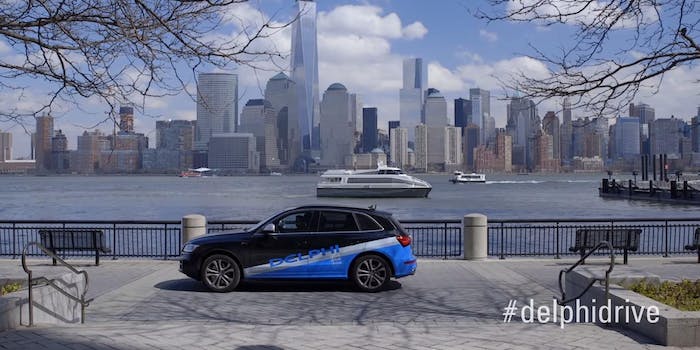 A self-driving car just finished its first journey across the U.S.

It's a milestone for automated vehicles.

In a major accomplishment that sets the stage for a new era of automated vehicle research and development, a self-driving car has completed the first trek from one U.S. coast to the other.

The British car company Delphi launched a customized Audi SQ5 from San Francisco on Sunday, March 22, and tracked it in a caravan of “follow cars” as it wound its way across the country. The 3,400-mile trip ended on Thursday, April 2, in New York City. The car was fully automated for 99 percent of the drive.

Delphi CTO Jeff Owens said in a statement that the car “performed remarkably well during this drive, exceeding our expectations.”

The car drove through 15 states, with most of the route crossing the southern U.S. in order to avoid hazardous winter weather to the north. Despite escaping maelstroms of snow, the car did have to contend with “traffic circles, construction zones, bridges, tunnels, aggressive drivers, and a variety of conditions,” according to the statement.

Along the way, Delphi’s researchers noticed that the car exhibited some surprisingly human tendencies.

“The car was scared of tractor trailers,” Owens said, according to Autoblog. “The car edged to the left just a little bit when it would pass trucks, and that was an interesting observation.”

Although the car was automated for virtually the entire drive, engineers did take control for 50 miles when conditions were too unpredictable for the car to safely traverse the road on its own. These situations included unmarked lanes, certain construction zones, and highway on- and off-ramps.

The research team that followed closely behind the SQ5 collected almost three terabytes of data on the car’s behavior. According to Autoblog, one of the things they learned was that the car’s onboard cameras occasionally malfunctioned “when the sun-angle was low.”

“The knowledge obtained from this trip will help optimize our existing active safety products and accelerate our future product development, which will allow us to deliver unsurpassed automotive grade technologies to our customers,” Owens said.