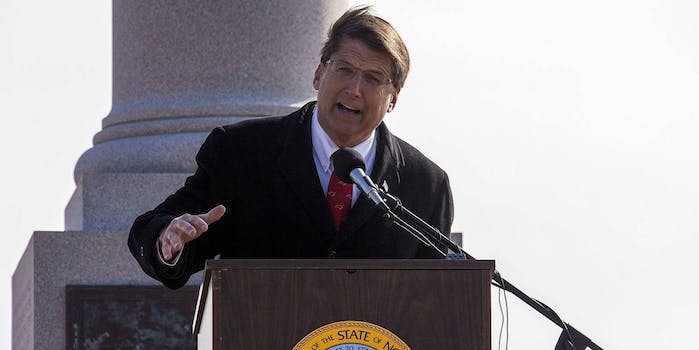 Gov. Pat McCrory is accusing the feds of a 'radical reinterpretation' of the law.

North Carolina Gov. Pat McCrory on Monday filed a lawsuit against the United States government in an attempt to save a controversial state law that the Justice Department said violates the civil rights of transgender Americans

The lawsuit marks a new boiling point in the struggle over House Bill 2, better known as H.B. 2 or the “bathroom bill,” which has sparked a month of nationwide protests that saw major businesses flee the state and high-profile entertainers cancel scheduled performances.

H.B. 2 mandates that anyone in North Carolina must use the bathroom in accordance with the gender identified on their birth certificate. The bill also overrides local anti-discrimination ordinances, among other provisions.

The Justice Department sent a pair of threatening letters on May 4 to notify state authorities that H.B. 2 violates Title VII of the Civil Rights Act of 1964 on the grounds that discrimination against transgender employees violates the law’s mandate against discrimination on the basis of gender. The DOJ gave North Carolina until Monday to respond. From the letter:

Please advise the Department, therefore, no later than close of business on May 9, 2016, whether you will remedy these violations of Title VII, including by confirming that the state will not comply with or implement H.B. 2, and that it has notified employees of the State and public agencies that, consistent with federal law, they are permitted to access bathrooms and other facilities consistent with their gender identity.

The state’s lawsuit is poised to spark a massive legal standoff, one that is likely to set policy going forward about whether states have the right to create laws that single out LGBT—and specifically transgender—citizens.

In the lawsuit, which was filed in a U.S. District Court in North Carolina, McCrory accused the federal government of creating a “radical reinterpretation” of the law, according to a New York Times report Monday.

The department contends that North Carolina’s common sense privacy policy constitutes a pattern or practice of discriminating against transgender employees in the terms and conditions of their employment because it does not give employees an unfettered right to use the bathroom or changing facility of their choice based on gender identity. The department’s position is a baseless and blatant overreach.

The Justice Department did not immediately respond to our request for comment.

After state lawmakers passed H.B. 2 during an overnight special legislative session in late March, a coalition of LGBT North Carolina residents quickly moved to sue the state in federal court. The lawsuit originally represented three employees and students of the North Carolina state university system, but it has since expanded to include a variety of LGBT state residents that are all directly affected by the law’s codified discrimination.

In a Fox News interview on Sunday, McCrory said he would make a decision in response to the federal deadline within 24 hours. The governor said that he felt the window between the May 4 letter and the May 9 deadline was too small, and that he did not agree with the feds’ offer to negotiate an extension.

“We don’t think three working days is enough to respond to such a threat,” McCrory told Fox News. “They said … we will give you a one-week extension if the governor admits publicly that the ruling, that their language regarding bathrooms does in fact discriminate.”

“Well, I’m not going to publicly announce that something discriminates,” McCrory continued. “Because we’re really talking about a letter in which they’re trying to define gender identity. And there is no clear identification or definition of gender identity.”